Teaching and Creating, in Hashem's Image 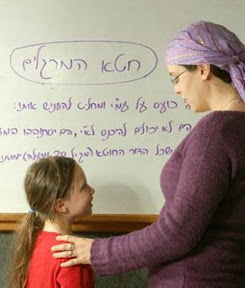 I remember my first teaching moment, when I knew that computer programming would have to take a backseat to Torah. Studying at YU, a friend asked me whether I would participate in a women's learning program on Wednesday nights. Reluctantly, I agreed, driving out to Westchester County during the cold of winter. But a funny thing happened when I would sit down to teach my class. Almost as soon as I sat down to begin the class, it would be over. The clock seemed to skip the hour during which we learned. (I hope my students felt the same way, at least to some degree.) But even more than enjoying the teaching, the experience changed me even more. I found the ability to help someone grow in learning and help them grow closer to Hashem intoxicating. And that's a feeling that's still with me today.
While we most often associate Parashat Bo with makkat bechorot and korban Pesach, the honor of "most famous passages from this week's parashah" (you didn't know there was such an honor) clearly go to the sections at the very end. Both קדש לי כל בכור and והיה כי יביאך gain their renown from the fact that they appear in every pair of tefillin ever written. The fact that they're tightly sealed in the black boxes doesn't help them, though. Yet, when we juxtapose these two sections we find several issues which require explanation.
Read the following two sections as carefully as you can, noting that they appear consecutively in the Torah. See if you can see how many topics, words and phrases seem to repeat themselves in the two sections.

When you look at the last two sections of the parashah, you quickly begin to see a lot of repetition. The following short list appears in both parshiot:

While there are a number of differences between the two sections, what strikes me most is the fact that that Torah seems to say the same ideas twice in two consecutive sections. Both refer to redeeming a first-born child or animal, both speak about inheriting the Land of Israel, both refer to the relationship between parent and child and seem to include some sort of teaching moment, and both allude to the mitzvah of tefillin. I point out these amazing similarities because they help highlight the differences. Obviously, the Torah need not relate the same ideas twice consecutively. These two parshiot must convey different messages, and we'll find them by highlighting several important distinctions between the two parshiot. While there are a number of important distinctions, I'd like to focus on just a couple:

Clearly, these differences raise obvious questions: why does the parent give an explanation to a child who never even asked a question? What's the difference between להגיד – "to tell" and לומר – "to say"? Why does the Torah use two different words to describe the same religious article in subsequent sections?

Asking Questions at the Seder
We generally assume that people teach so that others can learn. That seems to make sense. Whether we teach professionally in the classroom, or just learn individually with our children, or simply are showing our children how to take challah from the dough on Thursday night, we teach so that they can learn. Otherwise, if no one is listening, why spend the time or energy to relate the information? What's the point?
But then we come to the night of the Seder. Sure, we're supposed to answer our children's questions. They ask and we answer. But what if no one's listening? What if I'm stuck alone on the night of the Seder? What if there's no one there to ask me a question, and for me to answer? Should I still answer the question, or since there's no one asking, what's the point? The Mishnah in Pesachim addresses this question clearly stating that, while it's preferable for a child to ask his father, ואם אינו חכם אשתו שואלתו ואם לאו הוא שואל לעצמו – "if the son is not wise, his wife asks him, and if not, he asks himself." If there's no one else to ask me the four questions during the Seder, I must ask myself the questions and answer them as well. This only begs the question: what's the point of asking and answering questions myself?

The Male in Female in Each of Us
God created us to emulate Him. While we use the male form (Him) to describe God, Chazal teach us that God has no true gender – He is both masculine and feminine at the same time. I'm not a kabbalist (and if I was I wouldn't tell you), but the seforim (not sure which ones) teach us that each individual, created in God's image, has both of these masculine and feminine tendencies. Rav Soloveitchik, in a beautiful essay reprinted in ימי זכרון, explains that the דוכרא - the male aspect of God (and of us) is the part that gives – that influences others. Conversely, the נוקבא – the female aspect of God relates to the receiver, the part of us that is influenced and shaped by others. Keeping this in mind, we can now examine teaching in a new way.

Two Types of Teaching At first blush, we look at teaching in a purely utilitarian way: we teach in order to impart information. My daughter needs to know how to tie her shoes; my son needs to know his vocabulary in order to finish his Navi homework. Even in the classroom, my students need to know this information to be better, more informed Jews. (Or if you ask them, they need the information to pass the test – but that's a separate issue entirely.) In any case, we see the act of teaching in its functional form – useful and important, but nothing more.
But the Torah tells us that Hashem wants us to teach not only because our children or students (be they child or adult) need and want to learn the information. Rather, Hashem wants us to teach because the act of teaching transforms the teacher from a passive person – a נוקבא – into an active shaper – a דוכרא. When we teach we come to emulate God in a powerful and profound way, by become creators ourselves – creating students, new people, and more educated children. Thus, when we teach others, we not only change our students. Perhaps even more profoundly, we change ourselves.
This is the fundamental difference between the two parshiot at the end of Bo. קדש לי כל בכור reflects inward and relates to the transformational power of יציאת מצרים not as a lesson for our children, but as a means to change ourselves. For this reason, I must teach my child about יציאת מצרים whether he asks me about it or not. I'm not speaking to him necessarily. I'm telling him – והגדת לבנך – whether he's listening or not, (it's far better if he is listening, of course), and whether he's even there or not. I wear my Tefillin not as an adornment for others, but as a reminder to myself that when Hashem redeemed us from Egypt, He granted each of us the opportunity to become like Him in some small way: to be the creators of worlds. In this context, Hashem didn't take us out of Egypt. He took me – as an individual, destined and commanded to emulate Him to the best of my ability. The Torah sums up this idea powerfully when it tells us that the reason why I wear Tefillin is, למען תהיה תורת ה' בפיך – so that the Torah of Hashem will be in your mouth. In my mouth, and mine alone. As I teach, I transform myself and become closer to and more like Hashem in the process.
But then there's the practical aspect of teaching. It's nice for me to emulate God, to become a mini-creator, but someone's got to teach the children. Someone has to answer their questions. When people need information – when they're the needy נוקבא – when they require shaping, we all must step up to the plate. As parents we must teach our children; we must "speak" with them, listening to their questions and answering to the best of our ability. Instead of wearing Tefillin to remind ourselves of how Hashem saved us, they now become a טוטפת – an adornment to be seen not by me, but as a symbol for others, most notably, my own children. In this context we all become parts of a greater unit: Hashem took us out of Egypt. Tefillin remind us that Hashem redeemed us all. In practical terms, we become responsible for each other, and for all Jewish children. Every Jew needs to learn and grow, every one of us needs to fulfill the aspect of נוקבא – to be shaped and molded into better people and better Jews. And that starts with teaching our children about who we are as a people. It starts with יציאת מצרים.
All too often, we fail to recognize the transformative power of teaching, and the significance that Judaism places in it. We see only the practical value of teaching – and our own shortcomings, so we don't do it. Sure, if you're a professional teacher you do it. But how many of us shirk the responsibility of teaching our children and studying with them because we feel inadequate. We don't know the information that well; we can't explain it well; we don't relate all that well – we all know the reasons.
Parshat Bo reminds us that Hashem doesn't just want us to send our kids to someone else to learn the material. He wants us to emulate Him – to be creators of worlds. He doesn't just want them to learn. He wants us to teach.
And that takes effort and energy. It takes thought and preparation. You can't just sit down at the Shabbat table and bemoan the fact that you don't have anything to relate on the parshah. You have to prepare something beforehand; a topic to discuss, an issue to relate. Write down a list of questions to ask your younger children. Take the time to prepare a meaningful discussion that will engage and enlighten.
Because when you do, you'll see that it's not only about your children learning. It's about emulating Hashem, and become creators ourselves.
Shabbat Shalom.

Posted by Reuven Spolter at 3:05 PM