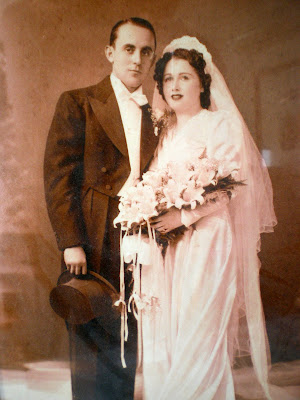 During my college years, on a number of occasions I flew down to Florida to spend time with my grandfather, who had (by that time) aged significantly, and would no longer fly up to visit.
Every so often, I would ask my grandfather to tell me about his youth. It was no picnic. Born in Calumet, Michigan during the copper boom there, when the mines ran dry his family decided to move back to Poland. (Who knew?) Because he happened to have the fortune of American birth, he had no problems returning to America as a teenager to build a life.
Arriving in New York, he worked hard - very hard. He stocked shelves, worked in stores; my Zayde never shied away from hard work. But what about Shabbat? I asked him. Stories abound of people who abandoned their observance of Shabbat, finding it impossible to keep a job without working Saturdays.
He shrugged. He wasn't the most eloquent of speakers. What did he mean?
"I didn't go in Shabbos," he told me in his heavy Polish accent. "And when I came in Sunday, they'd say, 'Where were you yesterday?' I wouldn't say nothin'. Most places told me to get lost. One week I was working in a dairy. When the man asked me where I was, instead of firing me, he just told me to get back to work."
My grandfather eventually built a family and successful business and in South Florida. He had three children, and over a dozen grandchildren, and to this day every one of them is what we'd call a shomer shabbat. But we'd be wrong.
Don't misunderstand me - every one of us does keep Shabbat. But to my mind, to be a shomer Shabbat - a guardian of Shabbat - you have to do much, much more.

When describing the observance of Shabbat, the Torah repeatedly returns to the concept of shemirah - guarding the Shabbat.

Three times during the course of six verses we find different references to Shemirat Shabbat - translated by Mechon Mamre as the "keeping of Shabbat." But a shomer is much more than a "keeper." Rather, the word can also connote a guardian - one who exerts energy to actively protect Shabbat. Moreover, the Torah itself seems to imply that "guarding" or "keeping" the Shabbat entails far more than just not violating its rules. In fact, the Midrash derives from this verse that one must be מוסיף מחול על הקודש - add from the profane onto the holy - essentially start Shabbat a little earlier than the required time, because the Shabbat requires guarding from without, and not from within.
Thinking about what it means to "guard", in life we encounter different types of guards. Let's say, for example, that the White House invited you to a meeting with the President. You'd encounter many types of guards along the way. First you'd be met by a guard at the gatehouse, who would check your identification and who stands at the door to ensure that strangers don't just walk into the White House. (As a total aside, they did used to do that. Read Doris Kearns Goodwin's Team of Rivals and you'll see that during the Civil War, soldiers not only walked in off the street - the bivouacked there as well.) Then, you would proceed to yet another guard, who would check you and your bags for weapons, dangerous items, banned materials and the like.

Finally you make it into the White House, secure and free from threatening paraphernalia. The President should be safe. But there's another, far more intimate level of protection provided by a third type of "guard": the Secret Service agent who serves in the Presidential Protection Unit. These guards don't simply stand at a door or gate. Rather, they commit to put themselves between a bullet and the President. In essence, they're willing to make the ultimate sacrifice to protect their charge. They take great pride in that sacrifice and their service to their country, as well they should.
Each of our three officers "guards" the President. Each plays an important role in his protection and safety. But we wouldn't for a moment suggest that the guard at the gate makes the same commitment and rises to the level in devotion and commitment to that of the Secret Service agent standing outside his bedroom each night.
Shemirat Shabbat has the same types of distinctions. Like the President, Shabbat requires constant vigilance and defense. But who are the guards at the gate, and who rise to the level of Shabbat's Secret Service agents?
I think I'm related to one.

Four years ago, my brother finished college and entered medical school. Even before beginning his medical education, he seriously considered abandoning his life-long dream of becoming a doctor, worried about the halachic compromises he would be forced to make during his years as a med student and resident. I strongly encouraged him to proceed, and that he would find a way to both become a doctor and maintain his shemirat shabbat. First of all, I told him, there are doctors who did find a way to navigate medical school without compromising on Shabbat. But my arguments had an ideological perspective as well: imagine that every Jew took his position, and no one entered medical school due to legitimate halachic concerns. What would happen to the Jewish world and the religious Jewish community were it not to have a cadre of strong, professional, Torah-allegiant doctors?
Whether or not he liked my advice I don't know, but he did enter med school, gaining admission to the University of Maryland in Baltimore.
During his second year of med school, my brother posted the following comment to a Medical Halachah blog post (Sadly, the blog doesn't seem to have been updated since 2007) about the importance of submission to halachah in the field of medicine:

I very much appreciate Akiva Bergman's comments regarding halachic observance and the practice of medicine. I am about to start my second year of medical school and have been waiting for a forum such as this to begin to address these complex issues. It is important for orthodox physicians to begin to address these issues as pertinent instead of using the "everybody does it" excuse. I was once talking to a resident in a non-shomer shabbos program. He justified his venture by stating that he would not be happy in any other specialty. Why was he willing to placate himself with such an excuse? Would someone practicing any other profession use such an excuse? I doubt that they would. I hope that this forum will be a starting point for us to advance the cause of adherence to halacha among orthodox physicians, residents, and medical students. The mere fact that we are engaging in this type of dialogue is an important beginning to this process.

He did well. I'm not that surprised. He's smart. He won scholarships, was recognized for excellence - the whole shebang. When the time came for him to choose a specialty he chose neurology - not the most popular on the list. I know that he liked neurology certainly, but clearly he had other factors in mind as well.
This month was "match" month, where future residents find out which hospital has accepted them into their residency programs, and whether they matched their choice with that hospital. For his neurology specialty, he needed both a year-long internship in regular internal medicine, and then three more years in neurology itself. But, when he flew around the country interviewing, my brother made it clear that he was only looking for a Shomer Shabbat residency: he would be happy to work as many hours as needed - but just asked that he would never be given rotation on Shabbat or Yom Tov.
My brother found a match for his three-year program, but not the one-year internship. A furious flurry of phone calls found him a one-year stint in, of all places, Metro Detroit. (Oh, the irony.) But what also was crystal clear was the fact that had he been willing to take a "normal" residency, he would have been taken with open arms at a hospital in Baltimore, for all four years. His wife could have kept her job. His family would not have needed to move. In essence, for the sake of Shabbat - so that he would never feel like he had compromised on his religious principles - my brother has sacrificed tens if not hundreds of thousands of dollars in income, comfort of community, and the need to move not once, but probably twice if not three times.
All for Shabbat. To ensure that he's a shomer shabbat.
Except, to my mind, he's not a regular, run of the mill "guard at the gate" Shomer Shabbat. He's a member of the Shabbat Secret Service.
I'm quite proud to say that he's my brother. And I know that my zayde would feel precisely the same way.
Posted by Reuven Spolter at 12:17 PM