The Value of Physical Work, part 1 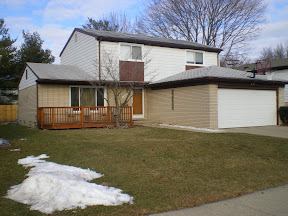 Members of my (former) shul during the middle of this decade will probably remember my porch. The reason that they'll remember it is because I wouldn't stop talking about it. I decided one summer (don't remember which one) that I didn't like the trees in front of my house, and that I also wanted Rena to have a place to sit and watch the kids as they played in front of the house. I decided that we needed a porch. And that I was going to build one.
Truth be told, I have long enjoyed working with my hands. My first real project in the house was a small closet for toys in the basement. That went relatively well, so the deck also seemed doable. Rena didn't say much. I think she figured that while it was a nice idea, I was never going to actually build the thing. So I think she was somewhat surprised when I started pulling out trees and bushes. By hand.
I really didn't have much of an idea of what I was doing. But I took a couple of books out from the libary, and watched a video on deck building a couple of times, and off I went.
The project took weeks. I measured and designed. I drew a detailed sketch of the way I wanted the deck to look. I pulled out the shrubs (not easy at all), and dug the post holes by hand. It was back-breaking labor, having to dig four feet down below the frost line. I could have hired someone else to do the holes, but (a) I was cheap -- really cheap, and (b) something in me wanted to do the whole thing myself. I mixed concrete and poured the footings. I cut the wood and laid the foundation. I drilled the holes in the house and attached the main boards. From start to finish, it was an incredible challenge, but I found myself rushing home to get to the project. Once I finished the main porch, I added a fence and stained and was done.
And it felt great. I loved coming home and seeing that deck. I loved knowing where I had cheated to get the thing to look right - a little extra sanding here, a cut there. I loved sitting on the deck.
I also spoke about the deck in shul, probably too much. But it was good speech fodder, as much as I can remember.
I have a friend in the rabbinate who I discovered also liked working with his hands. He told me that he thought that the reason we enjoyed the physical labor so much was the imprecise nature of rabbinic work. You visit the sick, give classes, deliver sermons. Even when people react positively to your work, (which did happen, ever so rarely), you never really know how much tangible effect you actually had. Sure, you have a vague sense that the speech really went well; that a certain family's growth in mitzvot is related to your efforts. But it's all just that - vague.There no immediate sense of gratification and accomplishment, the way you feel when you've finished fixing a door, or installing a ceiling fan, or painting a room.
I think that in a certain way, we're hard-wired to only get this true sense of accomplishment out of real, tangible work.
I'll explain why in my next post on this topic.

Posted by Reuven Spolter at 9:07 AM

Email ThisBlogThis!Share to TwitterShare to FacebookShare to Pinterest
Labels: Work