Canaries in the Coal Mine: The First Victims of the Building Freeze

Common sense tells us that the first victims of any change in economic policy are the people living on the fringes - most often the poor. When health care expenses rise in the U.S., the poor are the first to drop coverage, resulting in less primary care, disease prevention, and ultimately, visits to the emergency room. For most government policy, the poor are our canaries in the coal mine.
Most people think of the current building freeze in Judea and Samaria as a foreign-policy issue. Or a military issue. But in the real world, it's very much an economic issue, especially for the people who live in Judea and Samaria not due to ideology, but finances. I'm talking of course, about members of the Haredi community.
Beitar Illit and Kiryat Sefer (also known as Modiin Illit), two cities on the "wrong" side of the Green Line, represent two of the largest Haredi communities in Israel. (Full disclosure: my brother lives in Kiryat Sefer and my cousin in Beitar Illit.) Haredim are not known for their devotion to the notion of "Greater Israel." They didn't settle these areas to articulate a political vision. They built them to alleviate crushing financial pressure. Haredim prefer to live in closed communities, where they can create a lifestyle that adheres to their exacting religious standards. Jerusalem and B'nei Brak long ago reached capacity, raising real estate prices drastically. Hareidim also generally spend long years studying Torah, with little or no real job training, and even when they enter the work force, subsist on minimal salaries and large government support. Combine high real estate with low income and the impossibility of the situation becomes clear. Building cities beyond the Green Line offered a truly viable solution. The Haredim could build their own, insular communities, and they would do so in places where land was cheap, plentiful, and distinct from existing metropolitan areas.
And build they did.
Established less than 15 years ago, Kiryat Sefer boasts a population of 38,000 (at least). Children under the age of nine represent a full 50 percent of its population. That's a huge number which indicates incredible growth, stunning birthrates - all statistics consonant with Hareidi lifestyles. Put simply, these cities have very large, very young families who clearly grew up elsewhere are moved there to live. Obviously, these communities continue to grow at the same rapid clip. Their children marry early and begin having children, and they need a place to live.
Until this year, these new Hareidi cities presented the obvious solution to the community's demographic needs. They'd simply build a road on the next hill and build cookie-cutter apartment buildings which would quickly fill with new young families. When that fills up, you can start all over again. But with the total settlement freeze at least in practice, there are no new apartment buildings rising over Kiryat Sefer. Young couples can't find places to live. And we're starting to see the Hareidi community begin to react.

A couple of days ago, the Jerusalem Post featured this article about the lack of building in Beitar Illit. I was actually just there last Thursday. When you drive into the city, you immediately notice large swaths of empty land within the limits of the city, not at the edge of town. But they can't build there either.
Beitar Illit's mayor told the Post,

"Young couples are forced to live in converted storage rooms and underground parking lots. We have to do something about it." 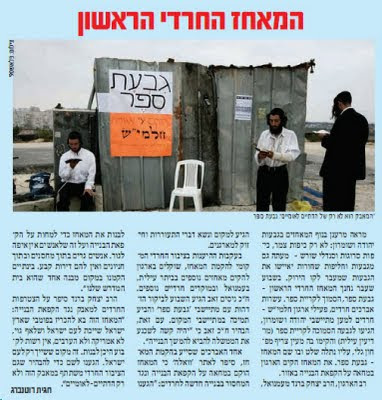 This week's issue of B'sheva (a free weekly paper published by Arutz Sheva, the same people who run the Israelnationalnews.com website) featured a small article about the "First Haredi Settlement" that they've called "Givat Sefer", right next to Kiryat Sefer. You can actually see Kiryat Sefer in the background. The new settlement - OK, right now it's a tool shed (but don't they all start that way), was established by an organization called Chalamish (in Hebrew the abbreviation חלמי"ש stands for חרדים למען מתיישבים יהודה ושומרון - Hareidim on behalf of the settlers of Yehudah and Shomron) One of the kollel fellows told a reporter that,

אנחנו רוצים להראות לעולם כולו את העוול שנעשה לנו. הציבור החרדי נמצא במצוקה אדירה של דיור, ונציגיו לא עושים כלום בכדי להקל עליו. אנחנו כאן בכדי להישאר, ונבנה כאן את כל המבנים הדרושים לנו
We want to show the entire world the calamity that has been done to use. The Hareidi community finds itself with a tremendous housing shortage, and its representatives aren't doing anything to lighten the load upon us. We are here to stay, and we'll build all the buildings that we need.

That sounds more like something you'd here from a "right-wing" settler than from a Hareidi group. But the Hareidim are different than your normal poverty-stricken run-of-the-mill coal-mine canary. They vote. And they're organized. They have tremendous political power to swing not only elections, but the entire government. And while the political leaders seem happy right now to remain in the Netanyahu government, if the housing crisis reaches a boiling point, they'll have less patience and more power than the Religious Zionist movement ever dreamed of having.
While we might not see eye-to-eye ideologically with Hareidim on issues regarding the Land of Israel, in the end, they may very well prove a stronger ally for building the Land of Israel than anyone ever imagined.
Posted by Reuven Spolter at 9:28 AM