Food as a Uniter, Food as a Divider; On Halachah. Ethiopian Jewry and Thanksgiving

Food can both pull us together and push us apart at the same time. Thanksgiving is an especially good example of this phenomenon. The meal - the turkey with the trimmings - brings families together like almost no other holiday on the calendar, especially in America. But as soon as the family sits down, or maybe even beforehand what does everyone start doing? Usually fighting, and mostly about the same fights that they had the year before.
This seems to be unique quality of food: its pulls and pushes, almost simultaneously.
I've started doing some programming work for semichah students at the Gruss Kollel in Yerushalayim on behalf of the Center for the Jewish Future at Yeshiva University. Part of this programming involves exposing the rabbinical students to different people and issues affecting Israel. This past Tuesday we welcomed Rabbi Michael Cytrin , who started an organization called Or L'Doron in memory of Doron Mahareta, who was tragically murdered in the Yeshivat Mercaz Harav massacre in 2007. (You can read about his organization, which supports Ethiopian kollel fellows here.) 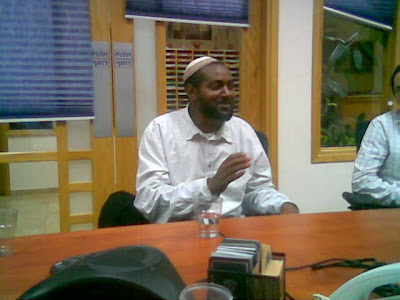 Rabbi Cytrin brought and an Ethiopian Kollel fellow named Uri Elazar who spoke about some of the unique challenges facing Ethiopian Jewry. He described a community that has been maintaining its own unique Jewish identity for over two thousand years, completely removed from the rest of the Jewish world. They had the same written Torah, but no Mishnah, gemara, or developed Shulchan Aruch. They had an oral tradition spanning thousands of years. And it worked for them, allowing them to maintain a dedicated, devoted, insular Jewish community in the face of adversity and persecution in the heart of Africa.
Imagine then arriving in Israel in the early 1990s and learning that the religion you considered authentic and timeless had actually "moved on"; that the religion you had been practicing for centuries was: wrong. How would you react? Would you simply change over and say, "Well, we've been doing it one way, but let's just switch"? Probably not. But then you send your children to educational institutions that, while honoring your traditions, teaches your children the new way. And as they learn the new rules and traditions, they not only forget the ways of their parents, but begin to reject them entirely.
When asked for a concrete example, Uri immediately brought up the issue of food. Eating food has been, and is supposed to be - a medium that unites. We come together around food, whether we do so as friends, as family, or as community. There is nothing as uniting as the ability to break bread together, and nothing as dividing as the inability to do that very same thing. (The rabbis were actually quite cognizant of this fact when they legislated against bishul akkum, pat akkum, stam yeynam - all instituted to create a barrier of separation between Jews and non-Jews.) In the Ethiopian culture (among many, many others), eating at someone's home symbolized respect and friendship. Not eating at their home when asked was a sign of rejection and disrespect.
Consider then the following problem:
According to Jewish law, before a shochet slaughters an animal or bird, he must carefully inspect his knife in a meticulous and prescribed manner immediately before the actually shechittah. Then, immediately following he must again examine the knife to ensure that the knife did not become nicked, rendering the animal treif. If a shochet failed to inspect the knife before the shechitah, Jewish law renders the animal treif. That's a halachic fact, with no wiggle room at all.
Ethiopian custom, on the other hand, does not have this requirement of knife inspection. Instead, according to Ethiopian tradition, the shochet must continually sharpen his knife until immediately before slaughtering the animal, without any pause between sharpening and slaughter. Essentially, it boils down to the fact that according to Jewish law, animals slaughtered according to Ethiopian tradition are effectively treif. (And Ethiopians don't buy meat from a store. To quote Uri quoting his relatives: "Buy meat from a store? In a package? How do you know who slaughtered it? How can you tell that it's kosher?" Good questions, actually.) So you're left with a situation where Ethiopians consider "regular" kosher meat unacceptable, and halachah considers meat slaughtered in the Ethiopian tradition treif as well.
So, when an Ethiopian young man or woman comes home from yeshiva for Shabbat, what should they do? Should they eat the food - which their teachers, who they respect, love and admire - have told them is treif? Should they reject their parents' food, tearing their family apart? (In the words of Uri, it's not uncommon for a father to say, "A son who does not eat in my home is no son of mine.")
I identified strongly with Uri's description of this ongoing problem in the Ethiopian community. It's not uncommon at all for members of a family to not eat in each-others' homes - and we're not talking about treif homes either, which only complicates matters. (One day, I'll write about the balance - or lack thereof - between the value of stringency in kashrut and the value of interpersonal family relationships and the friction caused when kashrut divides instead of uniting. But that's not a blog post. It's an article.)
I guess it doesn't matter whether you're an FFB, an Ethiopian Jew who made aliyah or just a plain American: Food does the same thing to all of us.

Posted by Reuven Spolter at 7:59 AM