Surprised that I Was Surprised 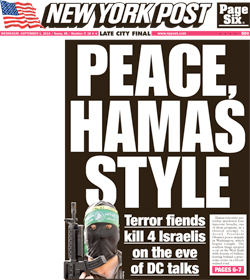 When I read the news last night about yet more senseless murder, I was a little surprised, saddened, as I am sure you were as well. After all, every attempt to reignite the peace process brings with it attempts to thwart its success. In the end, are we really all that surprised that a car full of gunmen would murder two men and two women in cold blood?
Yet, even for me the news from last night is strangely personal. One of the things that I do in Orot is the e-Newsletters to contacts from the college, including donors, teachers, students, alumni, etc, both in Hebrew and in English. This week I'm assembling the Hebrew email, and this morning I received an email from Orot's director of Development, asking me to add an announcement:

Somehow, it's no longer a name in the news. It's the son of a graduate of the college where I work. The news felt just a little more personal, immediate.
That's life in Israel.

Posted by Reuven Spolter at 1:05 PM