Mazal Tov to my son Bezalel. And to me. 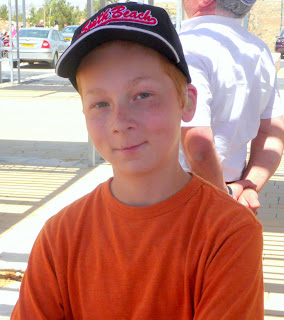 Recently, a neighbor approached me about his son's learning. It seems that he wants to supplement the Torah that his son is learning at school, and wanted to know what I suggested. After a moment, I suggested that he learn with his son Mishnah Yomit. First of all, it's not a lot of learning every day, but it is every day. Secondly, over the course of time, his son would acquire a tremendous amount of knowledge. And finally, the time invested learning with him in person would be invaluable to their relationship.
I made the suggestion, because I've been doing exactly that with my son Bezalel for almost a year now. Last summer, when the Mishnah Yomit started shas anew, I got a bug in my head that we should learn the two daily mishnayot together. Initially, Bezalel strongly resisted, wondering why I was forcing him to learn. But very, very quickly, he really took to the program, taking his learning very seriously, and ensuring that we were up to date. His reading ability (in Hebrew - we do the Kehati) has improved dramatically, as has his shas knowledge and learning skills. We fell quite a bit behind at one point, but eventually caught up, and last week concluded Seder Zeraim. Over the months we learned mostly in person, but at times on the phone, over Skype, and recently he's been calling me on my cell so that we could learn while I'm on the bus.
Tomorrow morning Bezalel will make a siyyum on the Seder, and we've already begun Moed. I'm really very proud of him, but I'm also proud of myself for sticking with the program and keeping after Bezalel when he wasn't in the mood, or I wasn't, or I was crazy busy - or all three. I myself had doubts about how things would go, and feel great about sticking with it. Now I just feel guilty for not learning regularly with Simcha.
Watching the joy on Bezalel's face when we finished that last Mishnah in Bikkurim gave me great joy. He had a sense of accomplishment and satisfaction that few children his age have, and I got that rare sense of satisfaction that one has from a long-term project which has reached a major milestone. It was hard work, but truly worthwhile.
That's what I was thinking when I suggested Mishnah Yomit to my neighbor. It's not just about his son's knowledge. It's about so much more.
He seemed hesitant, and when I asked him why he responded (honestly) that he didn't feel he had the knowledge to learn the Mishnah together with his son. That got me thinking (yet again) about a project that I had long wanted to do: a Mishnah Yomit website that would have the audio of the Mishnah, together with the text (and probably some clear explanation and translation). The audio could be specifically geared towards someone who didn't already understand the Mishnah (most Mishnah Yomit audio takes knowledge, lingo, and familiarity pretty much for granted). I got as far as buying a domain name (MorningMishnah.org), and then came to realize just how much time I would have to invest to do the project right.
I don't have that kind of time right now. But wouldn't it be a great project?
Posted by Reuven Spolter at 3:28 PM

Email ThisBlogThis!Share to TwitterShare to FacebookShare to Pinterest
Labels: family, Learning in Israel