Of the many, many troubling aspects of the jarring viral news report from Beit Shemesh that started the brouhaha, one particular recurring theme continues to trouble me. Why, the reporter asked, must young girls refrain from riding bicycles in the streets? The answer was immediate: 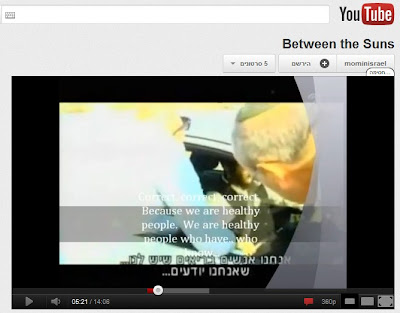 "Because I am a healthy person."
He didn't say this explicitly, but the implication was the because healthy people have normal, natural sexual urges, women must cover themselves to protect the men from their sexual urges. Moreover, someone who does not respond sexually to women in the streets is "unhealthy". They explicitly state this later in the clip. The secular not only don't respect women like the religious do, but...well, I'll let him tell you: 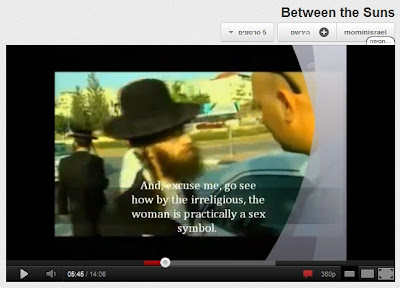 "...by the irreligious, the woman is practically a sex symbol."
In the eyes of the Chareidim, the entire campaign against the repression of women represents a cruel, twisted Purim joke. It literally is "venahfoch hu," where a group of people that demeans women are lecturing the true supporters of women on how to properly behave.

Let us pose a simple question: are they correct? Must women cover themeselves in order to protect men from sexual urges? In general, there's a kernel of truth to what they're saying. But just a kernel, which they have managed to warp and distort past any semblence of halachic thought.
Tzniut - modesty - in Judaism, is an all-encompassing worldview, applicable to both men and women. The underlying rationale for tzniut was long considered self-evident, and needed little explanation. The Torah's emphasis on modesty stems from the fact that how an individual purports him or herself directly affects his human dignity, individuality and spirituality.
Yet, much literature exists regarding the importance of women covering parts of the body so as not to entice men. For example, Rabbeinu Yonah writes in his Iggeret Hateshuvah (Letter of Repentance):

וצריכה האשה שתהא צנועה ונזהרת שלא יסתכלו בה בני אדם חוץ מבעלה שהמסתכלים בפניה או בידיה יורדין לגיהנם, ענושה בעונש כל אחד ואחד מהם מפני שהחטיאה אותם ולא נהגה צניעות בעצמה ונכשלו בה.
And a woman must be modest and careful that people other than her husband do not gaze upon her, for those who gaze upon her face or hands descend to Gehinnom, and she is punished along with each of them because she caused them to sin and did not purport herself with proper modesty, so they stumbled through her. (For an excellent general overview of the topic of tzniut in Hebrew, seethe Wikipedia article here.)


At least according to Rabbeinu Yonah, women do seem bear the burden of tzniut to prevent "healthy" men from falling into the trap of sinful gazing. And yet, that very quote raises some interesting questions. What's a woman supposed to do? How can she prevent a man from gazing at her hands and face? Moreover, if it's such a problem, why didn't Rabbeinu Yonah simply suggest that women stay at home, or at least remain separated from men at all times, and in all places. After all, is it not unfair for a woman, with her wily, womanly presence, to entice a "healthy" man and send them all hurling down into the pits of Hell?
The answer to each of these questions lies in an understanding of a term found throughout the laws of modesty called  הסתכלות (histaklut) - which means "gazing." While both utilize sight, gazing is inherently different than seeing. When I see something, my eyes take in visual information which I need to function in the world. On the other hand, gazing at something implies not just the intake of information, but taking pleasure from that visual experience. Seeing is visual. Gazing is not just a physical action, but a mental and sexual act as well.
The Torah admonishes us to avoid seeing inappropriate sights. But, as we all know, a human being can also take something entirely appropriate and warp that thing into something inappropriate.
Imagine a man who, when stopping at the local drugstore to pick up a bottle of shampoo, notices one of the female clerks (fully clothed) stocking the shelves. No big deal. He turns away, checks his cell phone. Nothing inappropriate has taken place. It's a mundane, commonplace occurance. It happens to each of us all the time.
But what if he stops stop what he's doing, and begins watching her stock the shelves. She sees him staring, and stares back for a good long moment. Then, acutely aware that she's being watched, she begins carefully removing each item from the box, gingerly placing it on the shelf. You get the picture. The two - the man and woman - have never met. They have never even spoken to each other. And yet, they did, without a doubt, share a sexual encounter.
That's הסתכלות, and that's forbidden by the Torah.
Rambam writes this clearly,

Rambam doesn't say that a woman can't go out in the street - although in truth he wasn't a big fan of women in the street. But if she acts appropriately and modestly, it's not the woman's responsibility to prevent a man from gazing at her. Rather, he must control himself, and refrain from gazing inappropriately.
In a way, our Chareidi friend from the video does have a point. It is unreasonable for a woman to dress in  provocative manner that calls attention to her body and objectifies her, and then wonder why men objectify her as well.
But the opposite is equally true. It's unreasonable for a woman, who is appropriately dressed, to be expected to take pains to avoid men who will unfairly and grossly sexualize her. Someone who cannot exhibit that reasonable level of self-control; who cannot walk by a woman on the same side of the street without gazing at her sexually; who considers innocuous interactions such as simple business transactions or simply sitting near a woman on the bus to be sexually provocative; that person is anything but a "healthy man."
That person does exactly what he claims the "secular" do, but in an even worse manner. By sexualizing properly, modestly dressed women and girls, he, more than anyone else, makes them into "sex objects."
And that's anything but healthy.
Posted by Reuven Spolter at 11:57 AM

Email ThisBlogThis!Share to TwitterShare to FacebookShare to Pinterest
Labels: Life in Israel, tzniut