The Cost - and Value - of Lashon Hara

Everyone knows that Lashon Hara is not only forbidden; it's also damaging, hurtful and wrong. Slanderous speech can ruin friendships, families and communities. Whole organizations exist to highlight the dangers of lashon hara and encourage us to avoid them.

Last week after davening, the speaker in my shul wondered whether one could speak about the foul smells in our yishuv (if such smells actually exist), or if that too is considered dibat ha'aretz - "slander against the Land," akin to the slander of the Meraglim. He suggested that there is a notion of speaking negatively about even the inatimate objects in Eretz Yisrael.
It was not a "halachic" talk in the strictest sense, but the speaker was trying to convey the seriousness of speaking slanderously about anything. After all, the Torah tells us that the Meraglim's sin was speaking negatively about the Land itself.
And yet, I couldn't help but wonder: Let us assume that because of the prohibition of Lashon Hara, no one spoke about the smell of sewage coming from the local treatment plant (if there is such a plant...) Rather, one only forwarded complaints to the responsible people in local government. Of course that's the ideal path to pursue. But I wonder whether government officials would respond with the same sense of urgency and vigor to a problem - any problem - if they knew that no one was talking about the problem.
It seems clear that sometimes the very fact that people are discussing an issue among themselves, in private, coerces individuals in power to try and effect change.
A prime example of this phenomenon is the growing awareness of, and attempt to address abuse within the Orthodox community. I recently saw a quote from a Mishpachah Magazine article (You can read the full article here)  from Rabbi Chaim Dovid Zwebel, the Executive Director of the Agudas Yisroel of America, who said the following: 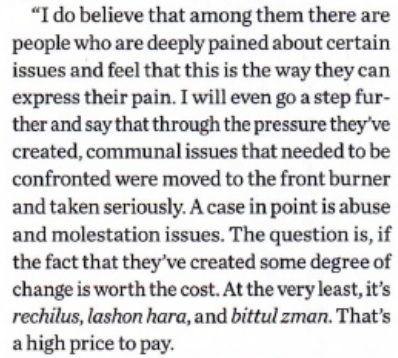 Yes, it is a high price to pay. But is it too high of a price? If the fact that people we speaking lashon hara saved a child - or tens, or hundreds of children - from the scourge of sexual abuse, is that worth the cost of the lashon hara? Many would suggest that it was.
It would be wonderful if people in prominent positions always acted altruistically, responding immediately to problems with alacrity and zeal. But even leaders are human. They must make choices, and prioritize, and decide which problems to attack and address, and which to ignore in the hopes - as vain and they may be - that they go away.
This is where the power of the crowd - the power of lashon hara - can affect their actions. If enough people talk about an issue; if enough bloggers blog and enough Facebookers post statuses, at some point, an issue cannot be ignored. It must be addressed, for better, or for worse.
And yet, are we not still speaking about lashon hara? Is it not still slander, speech forbidden by the Torah? Who are we to say that the benefit justifies the cost?
Posted by Reuven Spolter at 5:00 PM