It Must Be Confusing to Be Sephardic

No, I'm not writing about reciting Selichot at midnight for a month before Rosh Hashanah (although I'm happy I don't have to do that as well). Rather, I'm writing about the upcoming elections. It's got to be really confusing if you're Sephardic. I am, of course, writing about the ads now running across Israel.

First, I saw this ad: 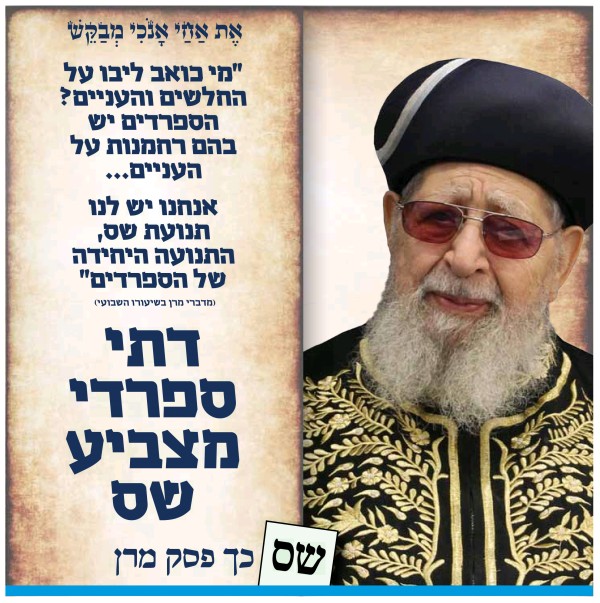 
Whose heart pains him over the weak and the poor? The Sephardim have compassion for the poor...We have the Shas movement, the only movement of the Sephardim" (from the words of Maran [Ovadia Yosef] during his weekly shiur)
A Religious Sephardi Votes Shas! So ruled Maran.


There you have it. If you're Sephardi, you ostensibly follow the halachic rulings of Rav Ovadia, and he ruled that one votes for Shas. (Actually, if you read the text carefully, nowhere did Rav Ovadia "rule" anything. But I dare not quibble with the Shas people writing their ads. If they say Rav Ovadia ruled vote Shas, who am I to disagree?


But then, I turned the page. Literally. In some papers, on the very next page, was this ad: 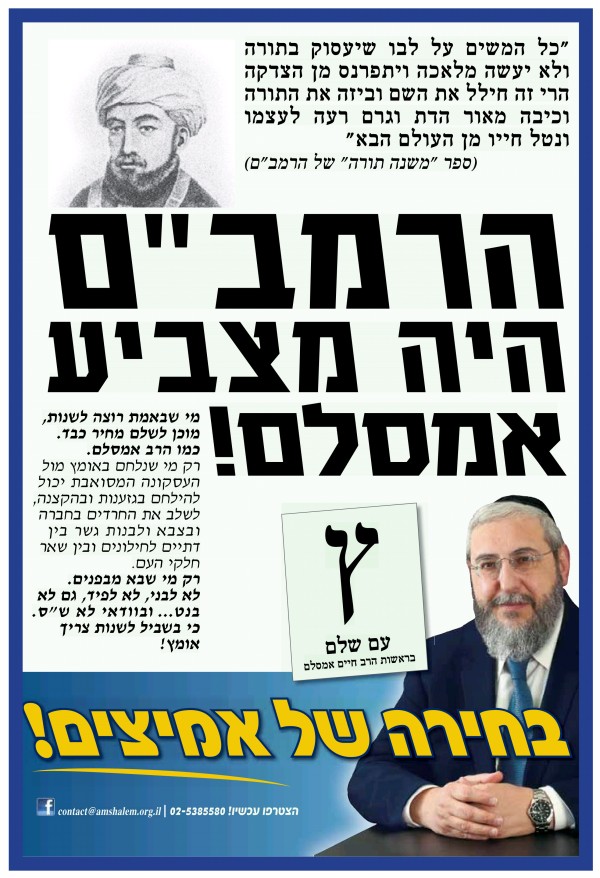 
"Anyone who decides in his heart to immerse himself in Torah and not work, and will be supported from charity - this person desecrates the Name [of God] and denigrates the Torah and extinguishes the light of religion and causes harm to himself and removes his life from the world to come (From the Mishneh Torah of Rambam).
RAMBAM WOULD HAVE VOTED AMSALLAM!
Anyone who really wishes to [enact] change is willing to pay a heavy price. Like Rav Amsallam.
Only one who fights with vigor against the massive "business interest"can fight racism and extremism, the integration of Chareidim into society and the army, and to build a bridge between the religious, the secular, and the other parts of the nation.
Only someone who comes from the inside.
Not Livni, not Lapid, and also not Bennett...and certainly not Shas. Because creating change demands strength.
The choice of the Strong!

Aside from the fascinating historical assumptions that the ad makes and the incredibly direct attack on Shas, calling it a corrupt, self-interested party of hacks who lack vision, strength and any sense of integrity - the ad must be confusing.

After all, how could Maran tell us to vote for Shas if Rambam himself would have voted Am Shalem? Did the Shulchan Aruch pasken like the Rif and the Rosh against the Rambam? Is there some Sephardi precedent that told Rav Ovadia to ignore Rambam here?

How is a Sephardic religious voter to know how to vote?

It must be so confusing.
Posted by Reuven Spolter at 6:50 PM