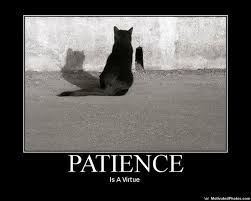 I've been trying to work on my patience recently, to little avail. Still working. Tonight I noticed that Haman's lack of patience brought about his downfall.
During the Purim story, when Haman, filled with anger at the fact that Mordechai refuses to bow down to him, even after being invited to the queen's private party, receives the following advice from his wife (who is specifically not listed as one of his "friends"):


Yet, Haman couldn't wait until the morning. No, he had to speak to the king right away. So, that night, he made his way to the palace to receive the king's blessing to execute Mordechai.
Wouldn't you know it; he just happened to pick the absolute worst night for his request; the very same night that the king was wondering how to reward Mordechai for saving his life. Imagine if he had waited until morning. I can see the king pondering how to reward Mordechai for a while, then tabling the issue as sleep overcame him, and in the morning, forgetting about the matter entirely.
Yet, Haman couldn't wait. And his inability to act with even a modicum of patience contributed to his downfall.
Esther, on the other hand, represents a model of patience. When she finally agrees to pay an unplanned visit to the king, she sensibly instructs the people to fast together with her for three days. But then, instead of bringing her request directly to the king, she...invites him to another party. Even the way she invites him strings him along, making him wait, and wait...just to find out what it is that she wants.


"Sure," she says to the king, "I'll tell you what I want, and what I risked my life to ask you...tomorrow."
It cannot be a coincidence that the king had trouble sleeping that night. Too many questions swirled around in his head to allow him to sleep, all because Esther, instead of rushing head on, took her time, and let him stew over one simple question: What does she want?
A little patience destroyed Haman, and saved the Jewish people.

Posted by Reuven Spolter at 8:38 PM