Half Shabbos/Shabbat Comes to the Holy Land. Is it Zomet's Fault?

Back in Israel after a relatively long family vacation, I was rifling through the Motzash magazines I missed (that's the magazine put out by Mekor Rishon, the paper most favored by the Religious Zionist community), and noticed that they did a long piece on the phenomenon of otherwise religious people texting on Shabbat.
The piece clearly generated a significant backlash (suggesting that rather than reporting on a phenomenon, Motzash actually helped to create one), because in the next issue the magazine editor defended himself from that charge, and it devoted two pages to responses from Rabbi Yona Goodman, Director of Chinuch Emuni (faith-related education) of the Orot College of Education (where I happen to work) and one from Rav Yisrael Rosen, the director of the Zomet Institute for Halachah and Technology. You can read the articles here.
Most American readers will probably not be surprised that the phenomenon has reached the Holy Land. It's been discussed in educational circles for several years now. People have been taking shortcuts (or making personal decisions about keeping certain halachot while ignoring others) since we received the Torah. Is this a phenomenon? Is it more unique than entire sections of the community ignoring halachot about negiah, or tzniut, or watching inappropriate media? Personally, as I too find myself addicted to my smartphone, I relish the fact that I cannot look at it on Shabbat, and feel sorry for people so addicted that they can't put it down for that twenty-four hour period. I also usually leave my phone home when I go to shul during the week; it's one less thing to distract me from the davening itself.
Yet, the conclusion to Rav Rosen's article fascinated me. After noting happily that the article outlines people who text on Shabbat aren't calling to change halachah, but instead don't think that their behavior is that terrible halachically (on the grand scale of things), he offers a fascinating confession: 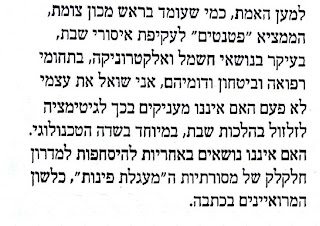 In truth, as the head of Machon Zomet, which develops "gimmicks" to circumvent the prohibitions of Shabbat, mainly in the areas of electricity and electronics in the areas of medicine, security and similar fields, I ask myself many times if we are not legitimizing disrespect for the laws of Shabbat, specifically with regard to technology. Do we not bear some of the responsibility for the drift towards the slippery slope of tradition of "rounding of corners" in the words of the interviewees in the article?

It's  a great question. Why specifically are we seeing this trend of corner-cutting specifically in the area of technology? Why aren't people cutting corners in the laws of Borer, or carrying outside an eiruv, or any other area of the Laws of Shabbat? Might people think to themselves, even subconsciously, "Well, if a doctor can make a call on his cellphone; if he can type on his nifty computer - then it can't really be that big of a deal, can it?" Sadly, Rav Rosen clears himself of all responsibility. 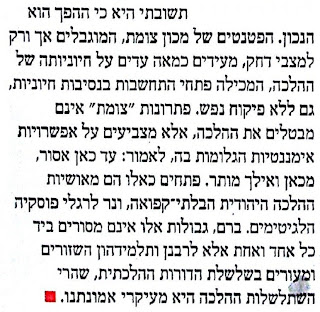 My answer is that exact opposite is true. The gimmicks of Machon Zomet, limited specifically to cases of great need, testify like a hundred witnesses to the vitality of halachah, which includes allowances to account for necessary circumstances, even if there is no danger of loss of life. The solutions of Zomet do not negate the Halachah. Rather, they highlight the imminent possibilities hidden within it, which say: Up to this point is forbidden, but from this point forward is permitted. Openings such as these are the foundations of the unfrozen Jewish Halachah, a guiding light for legitimate Poskim. However, these boundaries are not given into the hands of each and every individual, but instead [only] to those rabbis and their students spread and involved across the chain of the halachic generations. For the development of Halachah is one of the foundations of our faith.

Read what he wrote again, because it's certainly a mouthful. First and foremost, Rav Rosen's Hebrew is rich and difficult. And I also agree with his underlying conclusion: Halachah isn't static; it does adjust to the needs and developments of time. It's easy to say no, and much, much more difficult to find creative halachic solutions to challenging problems.
Moreover, the new reality of a Jewish country presents challenges that simply must be addressed: What is the meaning of Shabbat in an Israeli hospital? Or army? Or police? The country cannot and will not shut down. Even if you could, would you want to rely on non-Jews to run the country every seventh day? Was that really the ideal given to us at Sinai? (ושמרו בני ישראל את השבת - The nation of Israel shall guard the Shabbat [and have all the goyim do the stuff they can't?]") I don't believe this to be the case.
I firmly believe in the great work of Zomet, and the fascinating approach that they've taken to addressing difficult challenges of fealty to Shabbat in an increasingly technological world. But at the same time, Rav Rosen, "Thou doth protest too much!" ("Testify like a hundred witnesses"? Really?) Can we really say that the leniencies of Zomet have not, to some degree, contributed to this phenomenon of casualness towards observance of halachah in the area of technology? Issuing lenient opinions related to Shabbat and technology is exactly what Zomet does, day in and day out. So it can't just wash its hands when we see negative effects of that work, as important as it is.
What then is Zomet to do?
I believe that Zomet must begin to take the other side of the coin, and speak not only about things that are permitted, but things that are forbidden. It should embark upon a campaign for Shemirat Shabbat - perhaps on an elevated, more stringent level - precisely because so much of our community must invoke the kulot in their lives either as doctors, or soldiers or as members of local security details across the country. After all, it's impossible to measure the effect of permitted use on a person's attitude towards Shabbat. After you've used the computer (with the kosher mouse and keyboard) to manage your yishuv's security cameras, how greatly does that affect your attitude towards the normal, non-Shabbat computer? Is there any way to really answer that question?
Of course half-Shabbat is not Zomet's fault. But it also bears a responsibility to counter the negative affects of its work, so that it ensures that as it finds important workarounds to challenging questions, it isn't undermining the very value of Shemirat Shabbat it works so hard to uphold.
Posted by Reuven Spolter at 11:46 AM