A Modern, Tragic Aspect to the Tenth of Tevet

I spent last weekend as a scholar in residence for Tzohar at Congregation Ohav Tzedek in Merrick, Long Island. It was a very, very quick trip. Shabbat morning, I spoke about the fast of Asarah B'Tevet. Here's a part of what I said:

While most people (hopefully) realize that the we fast on the Tenth of Tevet to commemorate the beginning of the siege of Jerusalem in the First Temple Era, there’s an aspect to the Tenth of Tevet – a much more modern aspect, that many Jews are unaware of.
In Israel, the Tenth of Tevet is also known as יום הקדיש הכללי – the day of General Kaddish. (see here too) This is because on the 27th of Kislev, 5709 – in 1948, the Chief Rabbinate of the State of Israel declared that the fast of the Tenth of Tevet would serve as a commemoration for all those Jews killed in the Shoah who had no one to say Kaddish for them, or whose Yahrtzeit wasn’t known. If you had lost a loved one and didn’t know when they had died or where – or even whether they were buried, this became your Yahrtzeit.
Yet, the story, of course, goes much deeper. The Jewish State was in the midst of a great debate about the identity of the date which would commemorate the Holocaust. The secular community wanted the date to be the 14th of Nissan – the day of the Warsaw Ghetto Uprising. There’s only one problem with that date; it’s the day before Pesach. (Small problem.) The religious community – including most of the major poskim of the time – wanted there not to be a special, dedicated day at all. They felt that the best, and only day to commemorate the destruction of the Holocaust was Tisha B’av.  So, the Chief Rabbinate hoped that the Tenth of Tevet, which no one really related to anyway (but we still fast on), would become the de facto Yom Hashoah, and serve as a good compromise that everyone could live with.
The effort failed. The Knesset leadership, when it couldn’t have the 14th of Nissan, insisted on having the day at least during the month of Nissan – which it is today. (Israelis refused to have just a Yom Hashoah – a day of Holocaust. They insisted on focusing on the Gvurah – the uprising and the desire to fight back…) Chareidim don’t commemorate Yom Hashoah at all, as they consider it against the Halachah to institute a day of mourning during the month of Nissan. Nor do they mark the Tenth of Tevet as Yom Hakadish Haklali. Only a small fraction of the Religious Zionist community marks the Tenth of Tevet in this way.
Thus, the day that we spend fasting to commemorate the beginning of the destruction of the First Temple has now become a symbol not of our unity, but our inability to agree even on simple thing like the date to recite Kaddish for those who perished in the Holocaust.
We – the Jewish people – are standing at a crossroads today. What will the Jewish State that we leave to our children and grandchildren look like? Will we learn to find a way to create a meaningful balance between the desire for a truly Jewish State – a land enriched and defined by the Jewish values it represents, or will indifference, antagonism and apathy cause the unraveling of the very fiber of what makes Israel so historically, Jewishly unique? 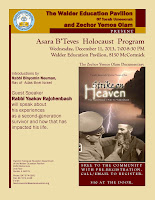 At lunch afterwards, someone pointed out to me that today, educators in the Chaireidi world in America have placed a new emphasis on teaching the Holocaust specifically on the tenth of Tevet. Whatever the impetus for this effort, it's certainly laudible and important. I guess in the end, the rabbanut got its way, at least in Brooklyn.
Posted by Reuven Spolter at 5:04 PM