Avoiding the Question, Or "Why David Kestenbaum's Sadness Makes Me Sad" 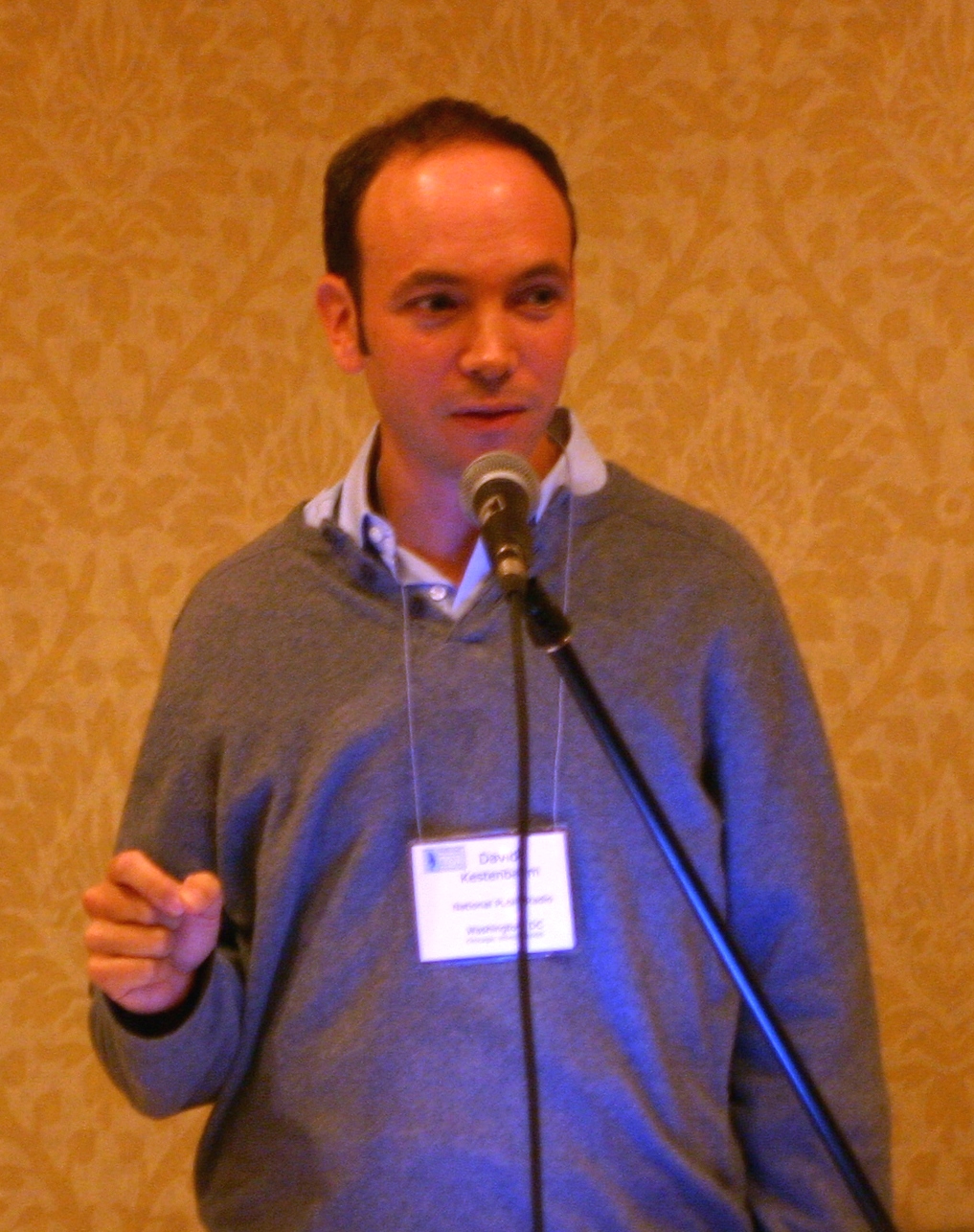 I feel sad for David Kestenbaum.

No, I don't know Mr. Kestenbaum, who is a producer-reporter for This American Life (although he used to be a particle physicist), a popular podcast that I sometimes listen to. But I'm sad, because he's sad (or at least he was - apparently, this is a repeat episode from a year ago).

Why is Kestenbaum sad? What's got him down as he brushes his teeth in the morning and goes about his day? A perplexing question called "Fermi's Paradox". Kestenbaum explains (I'm quoting from the transcript of the show, which is a conversation between TAL host Ira Glass and Kestenbaum that I've edited for brevity):


David Kestenbaum
So the story goes that this is 1950. Fermi's visiting Los Alamos, and they're sitting around at lunch. It's Fermi and a handful of other physicists and they start talking about extraterrestrials.

Ira Glass
One of the scientists who was there remembers that they talked about some New Yorker cartoon, which had flying saucers and cheerful aliens stealing our trash cans. They joked about it.

David Kestenbaum
And then out of nowhere, Fermi says something like, so where are they?

Ira Glass
And did people know what he meant?

David Kestenbaum
Yeah, somehow everybody knew exactly what he meant. The idea was basically that, like, the galaxy is this huge place, right? Hundreds of billions of stars. It's been around for billions of years. If you believe that intelligent life is something that just arises given enough time, where is everybody? Like, there have been billions of years, where civilizations could have developed and become way more advanced than we are and traveled from star to star, sent signals or something. Where are they? If that's right, where are they?

Ira Glass
This question became known as the Fermi Paradox, which goes like this. If it's so likely that intelligent life exists elsewhere, where is it? Why hasn't anybody shown up? And of course, the simple answer to that would be, well, nobody else exists.

David Kestenbaum
And I had never thought-- it made me think, maybe we're alone. I really thought that for the first time. Yeah, it made me really sad. I had never thought about it seriously before. I had always assumed that life was everywhere. But he's making a really serious point here. He's raising a tough question. The specific thought I was having was that this would mean that there's nobody out there who knows more than we do, like, about science, about-- there are no better songs. There are no better books. This is it, you know?

Ira Glass
So for months now, when David's brushing his teeth or doing nothing in particular, it'll hit him again. Maybe we're alone in the universe. Like this morning, on the train. Like, what we know is it. What we are is it.

The thing is, no one he talks to can really understand why it makes Kestenbaum so sad. They laugh off the question. What difference does it really make if we're all that there really is? Why does this question upset Kestenbaum so much? He never really explains what bother him, and other cannot really appreciate his angst.

I think that I understand what bothered him. But to me, what's sad about the whole story isn't that Kestenbaum is sad. The most upsetting aspect is the fact that he won't allow himself to ask the deeper question, and when he does, he rejects it out of hand.

To address his question, Kestenbaum turns to Melissa Franklin, his physics professor from Harvard, who he thinks will at least understand the question. After humoring him for a bit, Franklin starts to ask him some serious questions.


What exactly do you mean by being alone? Let's properly define the question here. You're talking about no intelligent life or no life at all? What if there's one crappy plant on another planet? How would you feel about that? What if advanced life like us is just a mathematical improbability, a total fluke?

Professor Franklin concluded, "And then you would say, OK, if that's the case, I have to believe in God. So that's what you're saying."

You would think that as a physicist - an empirical person trying to understand scientific truth, Kestenbaum would react seriously to this question. He would consider it and its implications, and actually wonder whether this was what's really bothering him. But no. He responds with a sad, actually pathetic argument.


David Kestenbaum
How many physicists do you know who believe in God?

That's his answer? He's been pondering a question for months, literally walking around in a funk from a question, and as soon as a serious thinker proposes that what's really bothering him is a much deeper question of faith and creation, rather than addressing the question seriously, he scoffs at it.

His answer isn't even an answer, and is actually irrelevant to the question. What difference does it make how many physicists believe in God? Maybe they're all under the spell of some cult. What about those six? Are they crazy? Have they lost their mind. Is that how science works? You take a poll of commonly held beliefs, and ignore the actual facts entirely?

Moreover, what if they Professor Franklin only knows six god-believing physicists because that's the circle of colleagues she has created for herself? According to a HuffPost article I just found (pretty easily), a recent Pew Research Center survey, "found that the percentage of scientists that believe in some form of a deity or power was higher than you may think — 51 percent."

Kestenbaum's response immediately made me think of the very first of C.S. Lewis' Screwtape Letters, which is a brilliant treatise about human nature and the cause of sin. In his letter, he explains how the devil (i.e. the yetzer hara) works very hard not by arguing with us about the facts. Quite the opposite. His most effective strategy is avoiding argument. 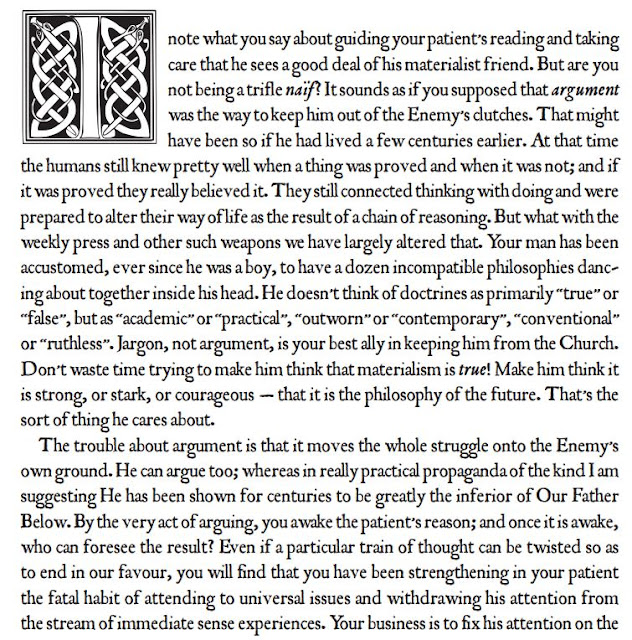 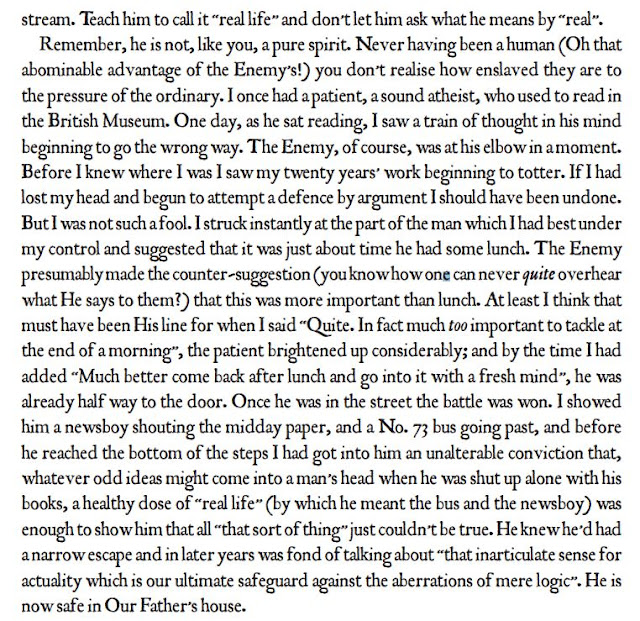 That's exactly what Kestenbaum does. Confronted with an argument, he avoids and deflects. Rather than try and address a difficult and challenging question, he responds by scoffing at the possibility that he might actually believe in God. After all, he's a physicist! And they don't believe in God, do they?

In fact David, many of them do. And while you once were a physicist, you're not really a physicist anymore. You're a journalist. And in the NPR world that you inhabit, they really don't believe in God, and really would ridicule you if you in fact did.

The fact that you cannot in fact see this makes me quite sad.