A Nation of Schnorrers 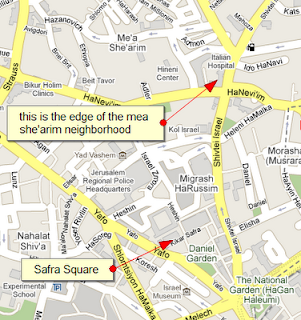 Each year on Chanukah, Orot (where I work) takes the entire administrative staff on a tiyyul. (It's a rather nice perk - a great day, and a fascinating tiyyul. We always hire a rather popular tour guide named Elyada bar Shaul, who sadly, speaks almost no English, and speaks Hebrew so fast that an American wouldn't follow. But he's truly a terrific tour guide. But I digress. You can see a tour of his following the footsteps of Rav Aryeh Levine here.) The tour, which followed some of the military activities of the Eshel and Lechi during the British Mandate immediately preceding the creation of the Jewish State, began at Kikar Safra and wound its way through some of the neighboring areas.
Towards the end of the tour, we wound our way through the back edge of Me'ah She'arim. I was lagging behind at that point, and was speaking with someone when I caught up to the group. As we passed through the street, I noticed an elderly Chareidi man, with a long, dirty black coat, white beard and his hand out, collecting money. 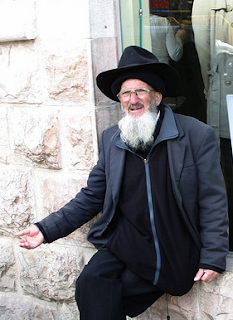 Posted by Reuven Spolter at 9:46 AM