A Letter from the Prime Minister...Sort Of

As faithful Chopping Wood readers might remember, I've been reading Yehuda Avner's powerful book "The Prime Ministers". I finally finished it. (As an aside, after all of his devotion and admiration for Menachem Begin, I marveled at the fact that he began his political career firmly entrenched in the Labor camp. It's a wonder how a high level government official on the left suddenly switched course and became an equally if not higher level official on the most right-wing of Israeli governments. What exactly were his political beliefs? And could Begin not find an English speaking aide to do the job so he needed to borrow one from the previous prime minister? Imagine the uproar if Barack Obama had retained George W. Bush's political advisers to assist him in vital government matters. But I digress.)
In any case, I was taken by the powerful chapter describing Begin's weekly shiur, and I thought to myself, "Our current Prime Minister is a big Tanach fan. His son was in the Chidon Hatanach. He'd probably like the idea of reviving the Prime Minster's shiur." So I sent him an email, from his website, suggesting the idea.
That was a while back. Well, this week I got a response, not from the PM, but from the Public affairs Department (their capitalization - really) Here's the letter: 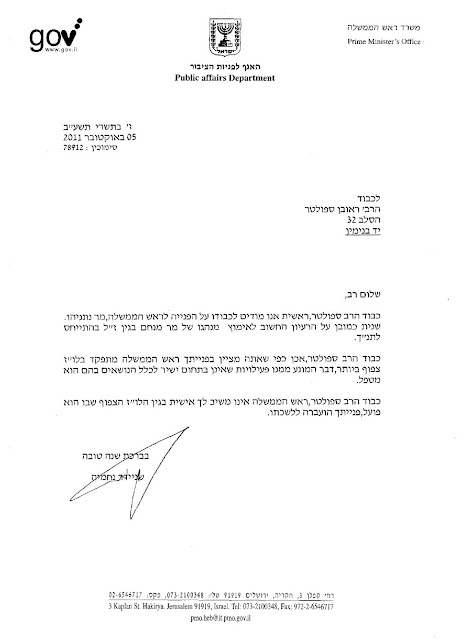 
In other words, he can't learn. He's too busy. (Except, of course, no one seems to have asked him.) Sounds just like the rest of us.