An Unusual Tiyyul and Praying for Rain 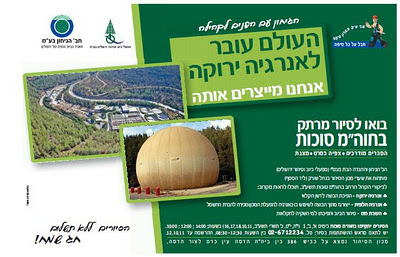 Reading one of the weekly alonim (parshah sheets - but they're really more like booklets) in shul called Matzav Haruach, I noticed the pictured advertisement for an unusual (and fascinating tour) of a Matash - that's a Hebrew acronym for מפעל טיפול שמרים, which is a nice way of saying, "Sewage Treatment Plant." I often write (in another forum) about Israeli efforts involving ecology and the environment, so I'd heard about advances in this area. And if you look at the ad carefully, the price was right (read here: free). So, off we went.
That's right. Yesterday we took a fascinating tour of the Jerusalem municipality's sewage treatment plant. What exactly do they do with the sewage that you flush down the toilet? Well, after they clean it, they send it right back down the river. (Not to worry. You don't drink it.)
Did you know that 98 percent of raw sewage is water? I didn't (but do now). Well, up until not too long ago, that raw sewage just flowed out of the city and into Nachal Sorek, literally mucking up the environment. At some point, people came to their senses and realized just how disgusting and environmentally destructive that is, and they built the sewage treatment plants.
At the plant,

I found the tour both informative and fascinating. Some interesting facts emerged:
1. The reason that you can't drink the sewage water isn't because of biological agents. Biologically, the water is clean. But they don't get out either soap or salt, so don't drink it.
2. Most streams in Israel are either raw sewage (I wouldn't hike in a Wadi between Yerushalayim and Ein Gedi if I were you. You can thank the Palestinians for that, who'd rather allow untreated sewage to flow into the environment than allow Israel to build a modern plant) or treated water. Either way, don't drink it unless you know that it's natural rainwater flow (think way up north).
3. We think that heavy rains are great for the country. While this might be true in northern areas that flow into the Kinneret and other water aquifers, it's not true about rain over much of the country. Too much rain is never good for the system. Rainwater flows into the sewage system and literally overflows the machinery. All they can do is let the sewage flow through and hope that not too much gets downriver. This fact reminded me of the famous story (see Ta'anit 3:8) of Choni Hame'agel.

Choni understood that when it rains too hard, that's also not a symbol of blessing. Great downpours overwhelm the fields and wash away into the ocean without sinking into the underground cisterns. And, they even overwhelm the sewage system, washing the sewage down the wadi without having a chance to treat the water.
So, when we pray for rain this week, we shouldn't just pray for a lot of rain. We do need the rain in great quantities. But we also need it in a smooth, steady stream, so that we can collect the water, treat it properly, and use it to generate life and blessing in the Holy Land.
Posted by Reuven Spolter at 10:36 AM

Email ThisBlogThis!Share to TwitterShare to FacebookShare to Pinterest
Labels: Life in Israel, Things to Do in Israel