The Latest (and last for now) Simcha Spolter 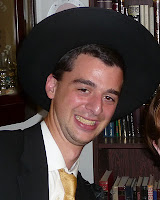 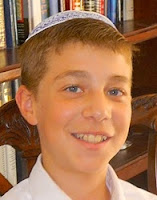 Almost 30 years ago, my father passed away at the almost unbelievably young age of 39. As I am now currently that very same age, I find this fact somewhat disconcerting, but more saddening. I (still) consider myself young. I have very young children, as did he. I have come to the point where I mourn the loss of his life not so much for myself - that feeling wells up at times too - but for him.
Because I now live in Israel only a short drive away from my father's grave, I am now able to visit his kever and pray there more than I ever did. On erev Yom Kippur this year, I found myself drawn there. It seemed not just appropriate, but necessary, and my two eldest sons, Simcha and Bezalel were there with me.

As we recited Tehillim, for reasons I don't really understand I landed on the chapters that begin with Shir Hama'alot, towards the end of the book. One chapter, Psalms 128, particularly caught my attention.

As I recited the words, tears welled up in my eyes. What's the most that a person can really ask for? Who is truly fortunate? King David was right: All you can hope for is to walk in the path of God, "eat the fruits of your labors", enjoy the blessings of a loving and dedicated wife, and sit with your children around his dinner table. Reading these words next to my father's grave, only two thoughts came to my mind: I have all of that (and don't appreciate it enough), and he never really did. At least not enough, to my way of thinking - although no one seems to have asked me. Now, even almost thirty years after his death, I mourn - not for me, but for him.
He was never able to enjoy the Bat Mitzvahs of his sons or the weddings of his children; he never held a grandson on his lap as he received his name, nor walked down the aisle to the chuppah with a child.
But he did set a standard for us - quite a high one at that, which continues to live on in each of his children, and now his grandchildren. He was a pillar; a man of knowledge and erudition, of ethics, morals and integrity. Quiet and introspective, even now it's clear to me that he commanded an unusual level of respect in his family, community and even at work.
Almost immediately after his untimely death, relatives began naming children after my father. My father's brother Arty named his eldest son, Scott, after him, making him the first Simcha Spolter of his generation. (My father's English name, Seymour, seems to have been out of the question for any of us. Little wonder why.) Soon after, my mother's brother named his son Simcha as well.
But my mother - and I think my siblings and I as well - always knew that we would name our sons after our father. And indeed we did. My two eldest sisters named their firstborn sons Simcha. The only reason the third sister did not name a child Simcha is because her husband's name is Symcha. (It didn't seem appropriate). My brothers and I followed suit, each of us naming our eldest sons after our father. I get a sense of consolation knowing that my Hebrew name, when I'm called up to the Torah is Avraham Reuven ben Harav Simcha, and that my son is called up as Simcha ben Avraham Reuven. It just fits. It seems right.
Last week, the Simcha (Raczkowski, of Baltimore) named by my eldest sister got engaged to be married. On the very same day, my youngest brother's wife gave birth to a boy after three girls. There was little doubt that he too would name his son after his father, although he never knew his father at all, having become an orphan at the unthinkable age of two years old.
Simcha Spolter z"l's namesakes live around the world in Chicago, Yad Binyamin, Baltimore, Boyton Beach, Kiryat Sefer, and Cleveland. It now seems clear that this newest Simcha Spolter represents the last of this generation of Simcha Spolters. With eight Simchas named after my father, this seems fitting. It's enough, and they have great shoes to fill.
Good thing that there are a lot of them.

Email ThisBlogThis!Share to TwitterShare to FacebookShare to Pinterest
Labels: Personal