Now Available in Israel! The Morning After Pill!

Last Friday afternoon, I rushed to the pharmacy to fill a prescription for a sick child. (As an aside, we couldn't find a doctor who was open on Friday, and we thought - correctly - that she needed a round of antibiotics. Happily, the message at the local clinic said, "If you'd like, for an additinal fee, you can have a doctor pay a house visit." Curious, I called the number. How much would it be for a doctor to come to the house? 73 shekel. I paid, and the doctor - a very nice, thorough Russian woman, was at our home several hours later.) In any case, as I waited on line at the drug store to fill my prescription, I noticed the following sign hanging over the counter. 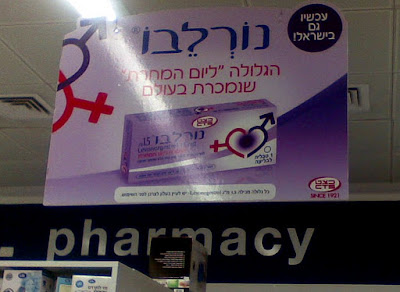 It says, "Now, also in Israel! NORLEVO - The pill for 'The Day After' sold worldwide." The box is for show only, because it only holds one pill.
That's right - the Morning After Pill is not only now sold in Israel - but prominently so! I'm not surprised that they're selling it here; just the open brazenness of the advertising - as if this pill is no different than the antacid sign that used to be there before.

I tried to imagine seeing an ad for "Plan B" (what the drug is called in the States) over a pharmacy counter in the United States. I simply can't. There was an outcry when the ad was scheduled to run on MTV. Imagine the uproar if this sign showed up in your local Walgreens. Quite the opposite. In the US pharmacists get fired when they refuse to sell the drug at all. And there's even a ballot initiative in Mississippi that would legally asign personhood to a fetus immediately after conception, making this type of drug - and most forms of contraception - illegal. (One wonders whether state troopers would examine womens' personal effects for contraband when entering the State). And yet, in Israel, which really is a far more conservative society in many ways than is America, nobody bats an eyelash at ads like these.
What about halachah's take on these pills? Can a rabbi allow a woman to take a "Morning After Pill"?
From a halachic point of view, the implications of these types of pills are not entirely clear. Halachah generally forbids contraception for normal, married couples, encouraging procreation strongly. At the same time, Jewish law permits some forms of contraception in unique, specific circumstances. (This is not a post about this topic. If you have a question, ask your rabbi, as this is a very complicated, involved halachic issue that's not fodder for a pithy blog post.)
In general, these "Morning After" pills don't abort the fertilized egg, but instead prevent it from emplanting in the uterus by triggering an early period. It's also probably fair to say that if a young woman wants to know if she can take the pill, there really is an extenuating circumstance. On the other hand, allowing the use of pills like these would only encourage even greater sexual promiscuity.
A rabbinic friend told me (off the record) of a case that he knew of where a posek permitted a young woman (not married) to take the pill. To what degree would an unplanned pregancy affect an unmarried, religious young woman? I would venture to say that it would affect her a great deal. Would that be enough to allow her to take the pill the mornnig after an "unOrthodox" encounter?
I don't know. To get an answer to that question, you'd need to ask a posek.
Posted by Reuven Spolter at 12:39 PM

Email ThisBlogThis!Share to TwitterShare to FacebookShare to Pinterest
Labels: Halachah, Life in Israel