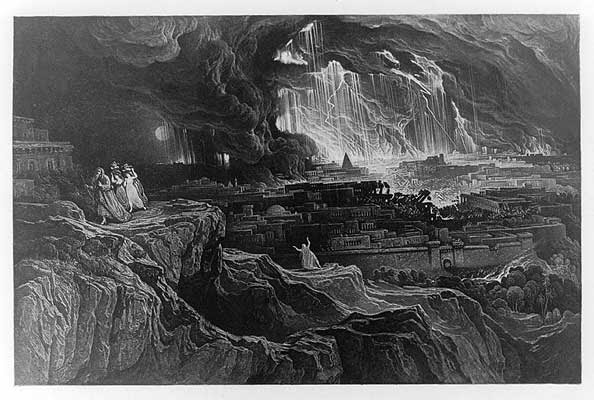 We find the most obvious example of greed in Torah literature in the description of the city of Sodom, and it's not a flattering description. When Lot lifts his eyes and looks to move away from Avram, he sees the lush lands in the Jordan Valley and the and the cities of Sodom and Amora, which were, "Like the garden of the Lord, like the Land of Egypt," and chooses Sodom. The represented an unwise choice as,

ואנשי סדם רעים וחטאים לה' מאד
And the men of Sodom were wicked and sinners against the Lord exceedingly. (Bereishit 13:13)

The people of Sodom were so wicked that they made the infamous list in Sanhedrin of people who, "Have no portion in the World to Come." How did their wickedness manifest itself? What made the so bad? Aside from the obvious (think Sodomy), the Midrash, in light of the "welcome" the angels receive when they visit to destroy the city, paints the wickedness of Sodom in monetary terms: they were exceedingly selfish. In simple terms, "they would not permit anyone to dwell in their city, and universally agreed not to receive guests, leaving them in the streets. They cut the trees surrounding the city to prevent the birds from benefiting from them, and passed a law in Sodom that any person receiving guests in his home would be burnt at the stake." (Yalkut Meam Loez, Bereishit 1, p 358). And they instituted numerous laws to ensure that strangers would distance themselves from their city for fear of harm. Simply put, they refused to feed beggars, and any beggar who remained in Sodom died of starvation. The Midrash tells the following rather gruesome story:


At that time, Lot married a daughter named Paltit to a citizen of Sodom. One day, a beggar came and asked her for charity, having already fasted several days - for no one would give him anything to eat. When Lot's daughter saw that he neared death she had compassion upon him, and secretly passed him food. Each day, when she went to the well to draw water, she would place bread in her jug and signaled to the beggar to take the food. This she did for many days.
The judges of Sodom marveled when they noticed that this beggar remained alive. They said, "Who is feeding him?" From the color of his face it was clear that someone was assisting him, and they needed to know who was committing the "crime" and had the [evil in his] heart to violate the laws of the Land.
So, three men went and hid secretly to discover the truth. The next day, they witnessed the daughter of lLot giving the man bread from her jug. They quickly ran and reported the matter to the judges of Sodom, who decreed that she be burnt to death. And they executed her in the center of the city to instill fear on the remaining people, that they not follow her ways and act with compassion towards visitors.

Yes, it was that bad. Thus, Midrashically, Sodom represents the worst aspects of monetary behavior: a miserly refusal to share in one's wealth to benefit anyone else, even the most desperate, coupled with a rigid enforcement of that very ethic threatening death to anyone who might violate the law and exhibit compassion for a needy person.
Where, though, do we draw the line? What is the root source of the wickedness of Sodom? Clearly, they were bad. But was it the death penalty for helping strangers, or their refusal to help in the first place? Or, was it the underlying attitude that their money was theirs, and they had no moral obligation to share it with others? While a proud capitalist confidently asserts an almost divine right to private property, the Mishnah isn't so clear.
In Avot, the Mishnah (5,10) presents four models of monetary policy.

Commentators clarify that when the Mishnah alludes to one who says, "What's yours is mine" - this does not refer to a thief, because thieves are clearly evil, and stealing is forbidden. Rather, these four archetypes represents an attitude towards money. One who says, "What's yours is mine" doesn't have to physically steal his neighbor's property. He thinks that he has a right to his neighbor's property, and that it really should belong to him.
Examining the first two models of monetary policy carefully, we find that they represent the two economic models we're familiar with:
"What's mine is mine and what's yours is yours" = Capitalism
"What's mine is yours and what's yours is mine" = Socialism
A red-blooded American would assume that Capitalism beats Socialism without breaking a sweat. But in the Mishnah, that's not the case. According to our Sages, at best, capitalism represents an average attitude. But the other opinion considers a capitalist worldview to be "The attribute of Sodom." On the other hand, the Mishnah labels the socialist as an am ha'aretz. Nowadays, if you called someone that you'd be insulting him. But in Mishnaic times it wasn't an insult. Rather, you were calling him the "salt of the earth." Rav Ovadia Bartenura explains that this is the type of person needed for the world to run,


For he benefits [from others] and allows others to benefit from him in equal amounts. And this is [necessary for the] settlement of the earth....and this is the meaning of the term am ha'aretz, [meaning that] he desires the proper function of the world."

In other words, the world needs people willing to share what they have in order to benefit from what others have to offer.
Given the choice, which attitude in the Mishnah would you rather adopt: the one that's either unremarkable and average at best, and at worst the underlying attribute of Sodom; or would you rather describe yourself as someone advocating a worldview critical for the proper function of society? Asked in that way, you'd clearly choose the latter. But then you'd be a Socialist.
In his commentary on Megillat Esther called Kol Ya'akov, Rabbi Ya'akov of Dubno wrote,

דע שלולא תורתנו הקדושה שאסרה לנו הגזל והחימוד, היה ראוי ע"פ משפט השכל להיות כיס אחד לכל אדם יחד ושתהיה יד הכל שוין בכל שפע וברכה בעולם ואין גזל ואין צדקה שייך כלל, כי הלא באמת אין בעלים ואדונים על העולם הזה ומלואו כי אם הקב"ה, וכשם שאין במרום שום בעלים ואדנות וממשלה כי אם להשם לבדו, וכן למטה ממדרגתנו כמו הבהמות והחיות שאין עמלם אלא לפיהם ואת היותר יד כולם שוין בו. אבל אנחנו עם בני ישראל להיותנו עם סגולתו ית' חלק לנו את הארץ הטובה ונתן חלק ונחלה לכל שבט, איש לפי פקודיו ע"פ הגורל, להיות כל אחד אדון ומושל על שלו. לפי שרובי תורתו ית' תלויה בזה, כמו צדקה ומעשרות לקט ושכחה ופאה ואיסור גניבה וגזילה וחמדת ממון זולתו וכדומה, כי אם היתה יד הכל שוה אין חסד ואין צדקה... שהתחלת היושר שבין בני אדם להיות מה שיש לזה – שלו ומה שלזולתו – לזולתו, הכנתו ית' הוא כי הוא החליק לכל אחד חלקו כאילו היה שלו באמת, והכל היה בשביל להגדיל תורה בישראל ולהאדיר.
Know that were it not for the fact that our holy Torah forbade theft and jealousy, it would have been appropriate according to the law of logic for there to be one communal wallet for all of mankind. Andh every person would have equal acess to the bounty and blessings of the world, and neither stealing nor charity would have any relevance at all. For in truth, there are no masters over this world and its contents other than the Holy One blessed be He; just as in the heavens there is no ownership and dominion other than God’s alone; and below our level among the beast and animals, where there toil goes only to feed their hunger, and what’s left is open to all equally. Yet, we the nation of Israel, so that we should be God’s cherished nation, He apportioned to use the good Land and gave an inheritance and a portion to every tribe, each according to his accounting based on the lottery, so that each person should me the master over that which is his. This is because the majority of God’s Torah depends upon this matter. Take, for example charity, tithes, leket, shikchah, pe’ah, the prohibitions against stealing or theft or coveting the property of another and other similar commandments. For if each person shared equally in the property there would be no kindness or charity…for righteousness between men begins with the principal that that which belongs to a person – is his, and that which belongs to the other – is the other’s. To prepare us for this the Blessed [God] divided to each person his portion as if truly were his, all of which in order to enhance the Torah in Israel. (Thanks to my boss, Rav Professor Neria Gutel, for sharing this source and the next one in a shiur.)

It's a jarring comment: really, which asserts that we should all share everything - total socialism. We shouldn't really own any property, because it's all from God in the first place. And, the only reason why God gave us private property was so that we could adhere to the mitzvot in the Torah related to ownership and property. How can a person give charity if nothing really belongs to him? So God "gave" us property - but not because we really own it. Rather, it's only a means to follow God's will.
Rabbi Ya'akov Emden makes a similar comment in his commentary on the Mishnah in Avot writing,

Rabbi Moshe Chaim Luzzatto (Derech Hashem, Section 3, Chapter 2) makes a similar statement regarding wealth and poverty, (albeit in a different context) writing that God bestows wealth and poverty simply as a means to give us the opportunity to grow both personally and spiritually. God gives the wealthy man money not because he's better at business than his poor neighbor, but rather to test whether he will be generous with that wealth or stingy; will he look down upon others who don't enjoy his level of affluence, or exercise humility towards others? Still, the wealth isn't his as an end, but rather given to him by God as a means to a far more important goal of personal and spiritual growth.
Posted by Reuven Spolter at 4:00 PM