November 2012 in Israel: All Politics all the Time

Obama vs. Romney? Hardly. It's go time in the Bayit Hayehudi.

In one corner, we have MK Zev Orlev, who successfully overwhelmed the current party head Minister of Science and Technology Rabbi Dr. Hershkovitz, so now they're running on the same ticket. Mr. Orlev's slogan is, מוביל ת'עניינים - loosely translated as "Making things Happen", which I take to mean, "taking care of people who I know who ask me to help them with their local issues."
That's not a knock, actually. He's known as a very caring member of Knesset, who's apparently quite willing to use his power to help people in the RZ community. Sadly, he's also been on the job while the party's power has consistenly waned over the past few years. See this ad, which has thoughtfully provided a nice visual aid charting the party's decline. 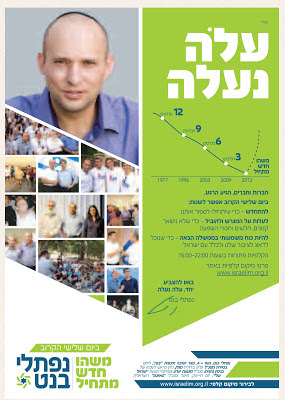 In the other corner is Naftali Bennett, a former Likudnik who made $140 million selling his software company, now vying for the party's leadership. He's trying to make the Bayit Hayehudi more of an "open tent", which as I understand it means seeking the votes of people who aren't necessarily Orthodox per se, and also addressing issues other than the settlements. Also, Bennet promises to finally unite the different factions together into a single party, which he claims has a chance of getting eight or more seats in the Knesset.
Actually, politically, I have no idea whether the two "sides" disagree fundamentally about anything. It's more about personalities now. Welcome to Israeli politics, where people vote more for people than for ideologies. How else would former media personalities have any chance of getting elected? Can you imagine Tom Brokaw getting a serious look in politics? Really?
In any case, the way I see it, it's boiling down to an election of old vs young. The old guard, (read here: over age 40 - or maybe 45?) who know Orlev, just don't trust Bennett. Sure, he's a good guy, but let him work his way up the ladder and earn his keep. They're all in for Orlev.
Anyone younger than that is simply fed up with the old guard, and the fact that they can't seem to get along with each other. The "Young Rabbi" wrote this morning that he doesn't know anyone in his circles who will vote for the Bayit Hayehudi if Orlev is elected. Young people are sick of the old way of doing things, and want someone new, who didn't make a life in politics to give things a try.
Will Bennett really do things differently? Will he really succeed in uniting the party? Who knows? I always feel like new people claiming to be able to do things differently (read here: Barack Obama) quickly discover that politics is a rough world, and idealism and promises don't always pan out as you'd hope. But at least they offer something different.
More of the same means even greater irrelevance for the Religious Zionist community in the coming government.
Posted by Reuven Spolter at 6:00 PM