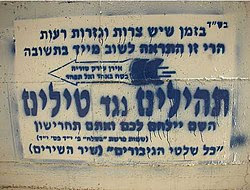 Like most everyone older the age of eighteen, I do and always will remember 9/11 - the sense of sadness, the eery quiet in the sky that followed, and the sense of disbelief watching the towers fall. Yet, my memories focus not on the tragedy, which was remote, but in our response. I was a new rabbi in Detroit, having arrived earlier in the summer to my shul. It seemed to me, as if often the case, that our best option was to pray. So I called for a communal davening, offering my shul to the community.
It really wasn't that hard to do. People needed an outlet. They wanted to cry out to God, and appreciated the opportunity. But what was most striking was the communal unity on that one night. Detroit, for all its wonderful attributes, isn't unlike many different Orthodox communities, comprised of many varied sub-groups, which often act independent of, and sometimes in conflict with each other. Sure, we got along, but there was (in my memory) all too often a sense of negation of the other, something all too common in the Jewish world today.
But not on the evening of September 11, 2001. On that evening, hundreds of Jews came to our shul to recite Tehillim. Rabbi Irons of the Kollel delivered a short talk. So many people came that the men filled the entire main sanctuary, and the women filled the social hall.
And it wasn't that hard to do. Just a few phone calls, some simple arrangements, and the community came together.
I doubt that our experience was unique. I imagine that this scene played itself out in communities across the United States. But it continues to sadden me that our greatest unity comes from tragedy and loss, and that we cannot come together unless we're suffering together.
Thoughts of the past bring me to the present. I'm worried about our immediate future. Tensions with Egypt. Palestinians about to announce a state in the United Nations - and then protest when nothing happens. And meanwhile, we fight with our neighbors about a building. (No, I'm not laying blame on the victims. But it's a reality.) Who's to say where this all leads?
I yearn for the unity of that evening, but fear the forces necessary to bring it.
One of the major themes of focus on Rosh Hashanah is the concept of Malchut. On that day, we coronate God as King of the World, perhaps best articulated by the powerful words of Aleinu:

והיה ה' למלך על כל הארץ, ביום ההוא יהיה ה' אחד ושמו אחד
And God will be King over the entire world. On that day, God will be One, and His Name One.

Yet, I sometimes wonder: How are we supposed to get the world to agree with us when we have such a hard time agreeing with each other?
Posted by Reuven Spolter at 9:47 AM