The Limits of Faith - A Lesson from Rav Kook 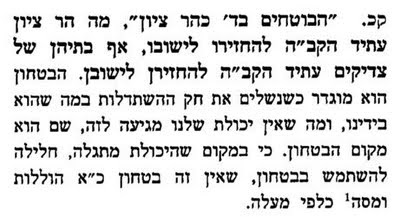 The Gemara (Berachot 58b) relates a story about Rav Chisda, who upon seeing the ruins of the house of R' Chana bar Chanilai - who was a very rich, very generous man - became depressed. I'll leave out the middle of the story for now, (which I will address in another post soon). Ulla, who was with Rav Chisda at the time, tried to appease him by quoting a pasuk which says,

הַבֹּטְחִים בה'--  כְּהַר-צִיּוֹן לֹא-יִמּוֹט, לְעוֹלָם יֵשֵׁב.
"Those who have faith in Hashem are like Har Tzion, which cannot be moved, but abide forever."

On this the gemara comments,


"Just as Hashem promises to rebuild Har Tzion, so too will Hashem return the houses of the righteous (that were destroyed)."


Bitachon is limited [only to the point] that we complete our efforts to the best of our abilities. That which our hands cannot reach - there is the place for Bitachon. For the place which our ablilies reveal, God forbid that we should use our Bitachon, for this isn't Bitachon, but instead foolishness and insolence towards Heaven."

I'm pretty sure that Rav Kook was talking about building the Land of Israel, and especially those who rejected Jews physically building the Land, instead insisting that we wait for a miraculous redemption. Yet, the message also applies to all aspects of our lives. God doesn't want to have Bitachon first. He wants us to act - to do our part, to the best of our abilities. After we've done that, then we turn to God with faith.
Then it's all up to Him.

Posted by Reuven Spolter at 5:30 PM

Email ThisBlogThis!Share to TwitterShare to FacebookShare to Pinterest
Labels: Faith