A Jarring, But True Video

In its efforts to encourage expatriate Israelis to return home, the government of Israel has latched onto a sure bet: Jewish guilt. That's right, come back to Israel, or your children won't really be Jewish.
If you can't understand the video, the grandparents ask their granddaughter, "And do you know what holiday it is?" Hint - see the menorah in the background! Granddaughter doesn't really know. Deep Voiced Israeli Announcer says: "They will always be Israeli. But their children won't. Help them return to the Land." What he doesn't need to say is, "Before it's too late."
Sadly, the video is totally and completely accurate. Israelis assimilate better and faster than almost any other ethnic group, for a very simple reason.
Israelis take their Jewishness for granted, for good reason. It's everywhere, all the time. It's impossible not to know when Rosh Hashanah is, because all the grocery stores switch over to RH mode weeks in advance. (The might be true in highly concentrated Jewish areas, but certainly not in the mainstream United States, where most secular Israelis live.) The country shuts down for the chagim - so even if you never set foot in shul, you didn't really work on Rosh Hashanah. Or Shabbat (usually). Judaism is simply pervasive in the Jewish state, as well it should be. It's a really good reason to live her.
It's not even only for religious people. Many secular Israelis like the Jewish rhythm of life in Israel. It gives you structure and informs life with meaning, all without needing to make any special effort. You don't need to reach out to other Jews. After all, everyone is Jewish.
Now take that person and plop him down into the melting pot that is the United States. Jews who grow up in America (at least the ones that want their kids to be and act Jewish) understand that you can't take religious affiliation and involvement for granted. You've got to reach out, connect and involve yourself. This represents the essence of community life for Jewish Americans. But the Israeli isn't used to reaching out and getting involved. For his entire life in Israel, religion and Jewish identity flowed in your veins. So many Israelis fail to make that necessary effort to connect to the larger Jewish community. And while they themselves might connect to other Israelis, their children, lacking any Jewish structure and home, assimilate at a fantastically quick pace into mainstream American society, and out of Judaism.
Exhibit A: A recent New York Times piece about a chef who, after the death of his brother in the IDF, turned to making Israeli food. 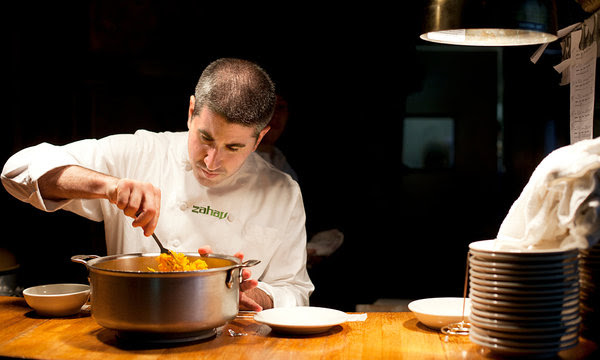 The chef, Michael Solomonov, following the death of his brother by a Hizballah sniper, decided that the best way to honor his memory was to open a restaurant dedicated to Israeli food. He's the poster child for Israel's message about assimilation:


He was born near Tel Aviv, spent much of his childhood in Pittsburgh, then returned to Israel with his family.

Nothing altogether surprising here. After all, he spent most of his childhood in Pittsburg. I guess in a way it's at least good that he felt enough of a connection to cook Israeli food. But what about the larger point? What about the issue of assimilation? Does it strike even the cook closely connected to the Jewish State whose brother died protecting it? Sadly, yes.

Last year, in a piece about the restaurant, the Chestnut Hill Local reported,


“Everyone in my family is a good cook,” Michael told me, “including my father, who was born in Bulgaria, and my grandmother, who is a Sephardic Jew. She really inspired me.” Michael’s wife, Mary Armistead Solomonov, who grew up in Mt. Airy, now lives with her husband in South Philadelphia. “She’s an Episcopalian, which is close to Judaism,” joked Michael. “They just drink a little more.”

No, Michael. It's not close. And your children will indeed know more about Christmas than they do about Chanukah, no matter how many hummus infused latkes you sell in your Israeli restaurant.
And that make me sad.
Posted by Reuven Spolter at 10:29 PM