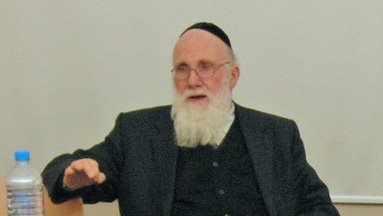 During my senior year of high school, Rav Meir Schlessinger - then the Rosh Yeshiva of Sha'alvim came to visit, deliver a shiur and interview. During the middle of his shiur, the secretary knocked on the door to the Beit Midrash and interrupted. Someone was on the phone for the Rosh Yeshiva; could he come and take the call? Rav Meir refused. "I'm in the middle of a shiur," he said. He then turned to us and commented, "Why is it that people rush to answer the phone? Here I am, sitting in front of you, in person. Why would I interrupt that conversation in order to speak to someone over a wire (this was before cellphones) who's probably hundreds of miles away?"
The story made enough of an impression on me that I remember it even today. I mention it because the notion of telephone ethics, and especially cellphone ethics, have gotten totally out of control.
Two recent articles, from very different sources come to mind. The NY Times ran a piece about the "question" of cellphone use in business meetings. I think that the Times thinks its rude to check your email or the internet during a meeting, but I'm not sure. Personally, I think it depends on the meeting. If it's a one on one meeting, then I would say it's rude. If it's a meeting with tons of people sitting there while someone drones on, what else should they do? It's a sure-fire sign that people are bored. Maybe then it's not the cellphone surfers who are rude, but the speakers who won't stop talking. (I've been to many a meeting like that.) It's interesting to note that smartphone rudeness lost the Democrats control of the NY State Senate. The Times reported that,

Tom Golisano, a billionaire and power broker in New York State politics, said last week that he pushed to remove Malcolm A. Smith as the State Senate majority leader after the senator met with him on budget matters in April and spent the time reading e-mail on his BlackBerry.

Even in politics, sometimes politeness pays.
I saw a very different source on this issue this week as well. In this week's B'ahavah V'emunah, a parshah newsletter published by Machon Meir (one of the zillions), Rav Aviner writes about the numerous negatives of cellphone use. In addition to physical danger, car accidents, cost, inappropriate content and other cellphone drawbacks, Rav Aviner writes, 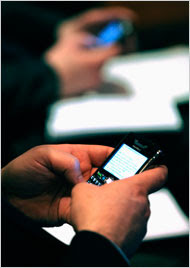 The cellphone that was intended to connect people in pleasant friendship, many times harms it instead, when in the middle of a friendly chat one person separates himself from the conversation to answer a call. That's an outrage! There's a sad joke about a couple that went out together for coffee, but they couldn't conduct a conversation becaues the husband sat opposite his wife taking cell calls. His wife moved a few feet away, called her husband, and explained to him that this was the only way she had left to speak with him. The same is true when a person speaks to the Master of the Universe in shul. During practically every tefillah we see someone get up in the middle of davening and leave to take a call - and he's not an officer [in the IDF] on duty or a doctor on call. Nearly every tefillah is interrupted by the ringing of phones.

I feel a little guilty. This morning during mussaf (the silent one) my phone rang. While I quickly silenced the phone, I stole a glance and saw that it was my house. The kids. (Rena's in the States.) After I finished - faster than usual, I left to call and see who was killing whom. Thankfully, all was well. But I had done precisely what Rav Aviner described.
I'm not sure what Rav Meir would have said. On the one hand, maybe I shouldn't have brought the phone to davening - or at least turned it off. On the other hand, I think it's probably better that I made it to shul at all.
Posted by Reuven Spolter at 8:19 AM

Email ThisBlogThis!Share to TwitterShare to FacebookShare to Pinterest
Labels: Ethics