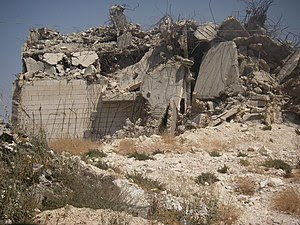 Anyone familiar with the devastation caused by terrorism in Israel recognizes the challenge of house demolitions. It goes something like this: if someone murders innocent people by blowing himself up in a pizza store, there's no real way to punish him to prevent future attacks. The only possible option is punishing his family, usually through home demolitions and the like. Hopefully, if a person knows that if he blows himself up his family will be out on the street, he'll think twice before actually doing it. Additionally, while the family might ideologically have been all for his suicide, when they face the prospect of homelessness their perspective may change somewhat.
Human rights advocates challenge this practice, charging that it's essentially immoral. How can you punish someone (or a family) for a crime that his relative has committed? In essence, this boils down to a form of collective punishment, banned by international law. On the other side of the debate is the argument of the practical: it works. When Israel uses house demolitions reliably, terrorist bombings go down. It's no coincidence that the Israeli supreme court, not usually known for any right-wing tendencies, has repeatedly upheld the practice as an unavoidable measure to prevent terrorist attacks.
But what about using collective punishment in a different arena altogether? What about using it to achieve a desired goal in the Orthodox world? While we might justify this type of morally ambiguous behavior to save lives, would we - or should we use it to free an agunah?
I ask the question because that's precisely what happened here in Israel this past week.
The Israeli Hebrew-language newspaper Mekor Rishon (which is really the paper of record for the religious Zionist community) raised precisely this issue in the Yoman section (page 14 of the June 19th issue) of this week's paper. (I can't link directly to the article because they have a weird website, so you'll either have to read it yourself after registering or trust me.)
Many of the facts in this case are clear: five years ago, the marriage between Yisrael Meir and Dina Briskman fell apart. Since that time, he has refused to give his wife a get, resulting in a declaration from the Jerusalem Beit Din that he is a recalcitrant husband subject to the full force of the Israeli justice system. There's only one problem: no one really knows where he is. And it's pretty clear that he's not in Israel.
Dina works at Machon Lev. So the people that she works with joined together to protest at the shul of Yisrael Meir's father, Rabbi Zalman Briskman, the rav of the Shimon Hatzaddik shul in Katamon, who says that he himself doesn't know his son's whereabou

ts. So we're left with a moral dilemma: is it right to protest against seemingly innocent parents, in the hopes that the either the family (which does know where their son is) will ultimately pressure their son to give his wife a get, or the son will want to prevent his parents from further suffering, so he will submit...
Or, as Miriam Goldfischer, a toenet rabbanit said, (and I'm translating),

It's a heart-wrenching case, and a gut-wrenching question, with no easy answers.
Posted by Reuven Spolter at 9:33 PM