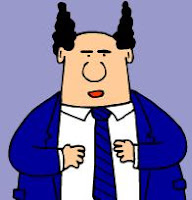 Imagine the following scenario:
You work for a religious boss at an hourly rate. Included in your work agreement is a short lunch break, but only for lunch. One day, your boss walks in towards the end of lunch and notices that you've been reciting the entire bentching. He becomes irate and starts screaming at you: "You're wasting my time! I pay you to work and you sit around bentching!" When you begin to claim that bentching is actually part of "eating" (he should theoretically agree, as he is a religious man), he says, "Sure, but not the WHOLE THING!" If you want to bentch, that's fine, but all the "harachamans" the now comprise the second half of birkat hamazon are extra, and I can say them on my own time. When you suggest that you can get back to work screwing in widgets and recite the rest of the bentching by heart, he again refuses, claiming that you won't be able to concentrate fully on my job if you're bentching.
That's when you lose it: "You're supposed to be a frum guy! How can this not be part of bentching? Let's go ask a shialoh, and whatever the rav says we'll do. If he tells me to stop half-way through bentching, I'll agree, but there's no way he's going to agree with you!"
You make the call. What do you think that the rav would say?
It's a pretty safe bet to assume that the Rav will take the worker's side. After all, first of all, he wants to finish bentching! Moreover, is it really such a long period of time? What kind of boss won't give his employee the three extra minutes to bentch?
And yet, if you look in the Shulchan Aruch - that's right, the code of Jewish law, things are not at all clear. In Orach Chayyim 192 Rabbi Yosef Karo writes,

פועלים העושים מלאכה אצל בעל הבית, א מקצרין בבהמ"ז, כדי שלא לבטל מלאכת בעל הבית; כיצד, ברכה ראשונה כתקנה, ושנייה פותח בברכת הארץ (א) וכולל בה בונה ירושלים וחותם בברכת הארץ, ואין אומרים ברכת הטוב והמטיב (ב) כלל. בד"א, (ג) כשנוטלים שכר על מלאכתן מלבד הסעודה, אבל אם אין נוטלים שכר אלא הסעודה שאוכלים לבד, מברכין כל ד' ברכות כתקנן
Workers employed by the master of a house must shorten their blessing after meals, so that they do not waste the work of the master. How is this done? They recite the first blessing in its entirety, and the second blessing begins with the blessing on the Land and he includes in it the construction of Jerusalem, and he concludes with the blessing on the Land. And he does not say the [fourth] blessing of "Who is good and brings goodness" at all. When does this rule apply? When the workers receive payment for their work aside from the meal. But if their only payment is the meal that they are eating, then they recite all four blessings as they were instituted.

Don't get too excited. In the very next halachah, the Shulchan Aruch writes that nowadays no one is so meticulous a boss that he won't let his workers finish the actual text of birkat hamazon. Yet, the original halachah is actually a direct quote from the Gemara (Berachot 16a) which is also cited by Rambam (Hilchot Berachot 2:2). Yet, what i find so interesting is the work ethic underlying the halchah.
The gemara assumes that when I take a job to work for someone at an hourly rate, I'm on the clock. My time is now his time, which makes sense, because he's paying for it. But that principle goes so far, that I don't even have the right to recite any additional, unnecesary aspect of bentching, to the point that the rabbis made special accomodations for workers - in essence designing an entirely new type of brachah, just so that the workers could get back to the job.
Contrast that with our sense of work ethic today.
When I was in high school, I got a job at a local software shop that designed recruiting software for the US Army. My brother-in-law worked there, and he helped me get the job. First I did all kinds of research for them, but eventually they decided that I could handle a software mop-up project that required going through a zillion routines and making simple changes in the code. It was great money, and I wasn't a counselor in summer camp. I was happy.
Well, they just stuck me in an office which had an empty desk. There were a couple of other people in the office, and I have vivid memories of other workers - one particular woman in fact, who would come into the office sometime early in the morning, and just hang around and shmooze literally all morning. I even remember her once staying so long that she finally only left when it was lunchtime. And I'd sit there, changing my code wondering, don't these people get paid.
Now I was no angel. I could chat a little as well. But there was also a frum guy there who would literally not talk to anyone at all. He had a Talmudic work ethic. He was being paid to work - so he worked. Ironically, while people respected him for his computer knowledge, I can't say that they really related to him, which is also important if you want to advance in an office environment.
I was just struck by how far we've sunk. What happened to the work ethic of bentching; a sense that if you're being paid by the hour, you work a full hour? Somehow over time that's been lost. And I'm not sure that our society is better off because of it.
Posted by Reuven Spolter at 10:19 AM

Email ThisBlogThis!Share to TwitterShare to FacebookShare to Pinterest
Labels: Work