What Hashem Wants From Us - Devar Torah for Parshat Chukat 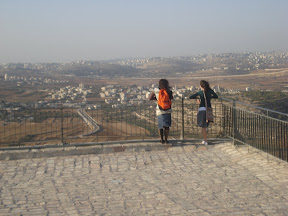 For the last couple of weeks, people in Israel have been feeling a little more tense than usual. Many of us are worried about the direction that the US government has been moving – more towards Arab appeasement, more pressure on Israel. Working at a school in the beautiful city of Elkana, looking out over the hills at the city of Tel Aviv below, you wonder how anyone could even think of abandoning not just beautiful land, but strategically critical areas. And yet America's President keeps insisting on "no more building the in settlements." Where I work. On the wrong side of an arbitrary line. So we're a little more nervous than normal.
When I brought up the topic with a relative living in the States, she told me that of a conversation she had with someone who said, "Whatever Hakadosh baruch Hu wants – that's what's going to happen." Clearly, that's true. But it also implies that what we do really doesn't matter in the end and that everything is in Hashem's hands only. I couldn't disagree more.
Chukat relates the strange story of the Nachash Hanechoshet – the copper serpent that Moshe made to save the people from death. At the conclusion of the forty years of wandering in the desert, the reborn nation is now ready to enter the Land of Israel. Yet, as their travels begin to drag on and they travel around Edom (instead of attacking and going right through it), the young nation grows impatient and begins to complain.

לָמָה הֶעֱלִיתֻנוּ מִמִּצְרַיִם, לָמוּת בַּמִּדְבָּר: כִּי אֵין לֶחֶם, וְאֵין מַיִם, וְנַפְשֵׁנוּ קָצָה, בַּלֶּחֶם הַקְּלֹקֵל
Why have you brought us up out of Egypt to die in the wilderness? There is no bread, and there is no water; and our soul hates this light bread.

They don't complain about the issue at hand – their desire to enter the Land. Moreover, they don't actually tell the truth: there is water, and they're not dying in the desert. In short, they're simply kvetching. Hashem punishes them swiftly and severely: serpents emerge in the desert and begin fatally biting the people. They immediately repent and beg Moshe to pray for the removal of the snakes and their salvation, which he does. Hashem, instead of immediately eliminating the snakes, instructs Moshe to construct a serpent and hang it on a pole, וְהָיָה, כָּל-הַנָּשׁוּךְ וְרָאָה אֹתוֹ, וָחָי, "Whoever is bitten, when he sees [the serpent] will live".
Yet, Rashi notes that when the Torah tells us what actually happens, the people don't just "see" the serpent. Rather, וְהָיָה, אִם-נָשַׁךְ הַנָּחָשׁ אֶת-אִישׁ--וְהִבִּיט אֶל-נְחַשׁ הַנְּחשֶׁת, וָחָי, "if a serpent had bitten any man, when he looked at the serpent of brass he lived." Why, Rashi asks, if Hashem tells Moshe that the people only need to see the serpent do they specifically look at it? Rashi explains,

Chazal derive an important and well-known principle from this story (in Gemara Rosh Hashanah 29a):

Does the serpent kill or give life? Rather, when Israel looked towards the heavens and subjugated their hearts to their Father in Heaven they would be saved, and if not they would wither.

From Rashi we can derive three levels of activity and salvation among the people: Someone who was bitten but for some reason never saw the serpent tragically died. A snakebite victim who happened to see the copper snake would heal, but slowly. Finally, the person who stared intently at the serpent enjoyed a speedy recovery. All of this makes me wonder: If Hashem had already forgiven them and if the matter truly hinged on an individual's personal level of Teshuvah, why create the copper snake in the first place? Why should the speed of someone's recovery depend on whether he saw the snake peripherally or stared at in intentionally? What difference does that make?
It makes a great deal of difference. While it's true that "everything is in Hashem's hands and whatever He wants will happen in the end," I believe that Hashem wants most for us to take an active role in our own lives. Sure, He could have healed the sick without any input from us whatsoever. But Hashem doesn't want us to lead miraculous lives. He wants us to live in the real world and appreciate that what we do truly makes a difference, both spiritually and physically. He wants us to have faith; but also to believe that our efforts can and must effect change in the real world.

That's precisely what I said in response to the person who said about the "settlements" that, "Whatever Hakadosh baruch Hu wants – that's what's going to happen."

I couldn't agree more. But what He wants is for us to stand up, be counted, and do our utmost to ensure that His Land remains firmly in the hands of His nation.
Posted by Reuven Spolter at 9:17 AM

Email ThisBlogThis!Share to TwitterShare to FacebookShare to Pinterest
Labels: Chukat