The Truth about the "Settlements" 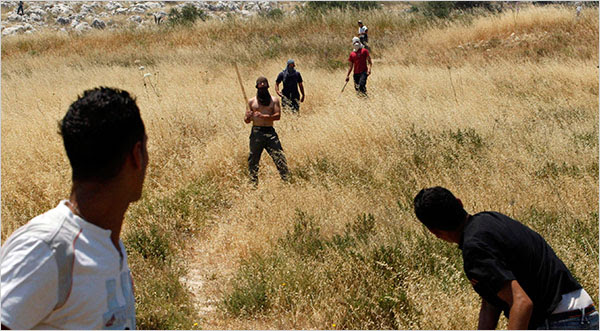 We need to stop talking about settlements in a broad stroke. Sure, there are settlements in the classical sense. There are small communities on hilltops, and little outposts with caravans. But most of the population living in Yehudah and Shomron don't live in settlements. They live in cities and towns just like you, and the quicker we get that into peoples' consciousness, the better off we'll all be.
The world clearly likes the image that it has of "settlements." They're filled with a bunch of renegade Israeli crazies, hell-bent on holding onto any and every piece of land to fulfill God's promise to the Jewish people. Truth be told, I guess I'm one of those "nutjobs." Witness the picture associated with the article in the New York Times in this article. Who wouldn't be against crazy masked bare-chested settlers brandishing sticks. (Note to bored Israeli youth: please stop. You're not helping. Take off the masks, put on a shirt, and go back to school. Thank you.)
But in the real world, the vast majority of "settlers" want nothing more than a normal life. Writing about Kfar Tapuach, the article itself (far less inflammatory than the headline) states,

Revitalized from within, the community also attracted young couples from other settlements and from cities in Israel who were seeking a lifestyle that combined relatively cheap suburban comfort with the national-religious ideal of settling the land.

It's about Eretz Yisrael, sure. But it's also about affording a house and living in a place where your kids have parks and can run around freely. And it's not as simple as most Americans, including our President, think. How entwined is my life in the "settlements"?
It's difficult to express just how entrenched Israeli life is in all of these places. They're places people live and work. Calling them "settlements" and demonizing the people that live and work there won't change that fact.

Posted by Reuven Spolter at 9:24 AM